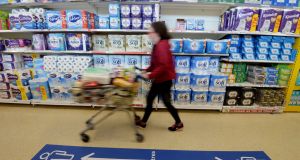 The Tesco chain says its online sales now account for 16% of the total, up from 9% before the pandemic

Tesco Ireland has recruited 1,000 additional personnel since the onset of the Covid-19 pandemic to help the business run smoothly during the crisis.

Its parent Tesco, which is the UK’s biggest supermarket chain, separately said on Monday it would create 16,000 new permanent jobs to bolster its rapidly growing online grocery business.

A spokeswoman for Tesco Ireland said: “During Covid-19 we recruited an additional 1,000 colleagues across the business. We were delighted with the success of our family and friends recruitment campaign which brought 760 colleagues into our stores and distribution centre, with the reminder joining the business through the normal recruitment channels.”

She added that the initiative had the “dual benefit of ensuring that the business ran smoothly during an extraordinarily busy time, and colleagues could work alongside friends and family who had been made redundant as a result of Covid-19”.

While Tesco Ireland could not provide figures for its online sales compared with the months before the virus reached Irish shores, the spokeswoman said there had been a five-fold increase in the market share of consumers over 65 in online weekly shops.

“Prior to Covid-19 approximately 3 per cent of our online deliveries supported our 65s customers,” she said. “Encouraged by the Think Before You Click campaign and our prioritisation of this group, they now account for 14 per cent of online weekly orders.

Tesco said the new UK roles would include 10,000 “pickers” who assemble customer orders, and 3,000 drivers to deliver the goods to British households. The 16,000 permanent jobs were in addition to 4,000 created since the crisis started, the retailer said.

Tesco, other grocers and delivery services like Ocado have recorded vigorous growth in their digital businesses as the pandemic has prompted consumers to order their groceries rather than travel to supermarkets to purchase them.

Tesco said on Monday that online sales now accounted for 16 per cent of the total, up from 9 per cent before the pandemic. It expects internet sales to jump by two-thirds in the current year to £5.5 billion (€6.1bn).

This trend has been replicated across the industry, with online market share reaching a record 13.5 per cent in the 12 weeks to August 9th, figures from market research group Kantar show.

Coronavirus had in a few months spurred supermarkets to expand their online channel share by percentage points it would previously have taken them years to gain, said Clive Black, analyst at Shore Capital.

“It feels pretty permanent this change; a lot of people such as the elderly who had shunned digitisation have now become internet shoppers and won’t go back to stores.”.

But online shopping is not without its challenges. Supermarkets have struggled to profit from the boom in demand for home deliveries, with both Tesco and rival J Sainsbury having said they expect to make the same profits this year despite a huge transfer of food consumption from restaurants and bars because of the pandemic.

The cost of picking orders for customers, coupled with offers of free delivery to lure customers, has long dragged down profit margins for online shoppers.

With supermarkets now operating online channels at full capacity there is, however, no need for such aggressive promotions. Mr Black said more home deliveries also meant vans did not have to travel as far to empty their loads. “A marginally loss-making business is becoming marginally profitable,” he added.

Tesco, the biggest UK supermarket by market share, said it expected “the majority” of the new permanent positions to be filled by temporary employees who joined since the Covid-19 crisis began earlier in 2020.

Tesco said in June that it faced rising costs to adapt its business to endure the Covid-19 crisis, including spending to increase its online capacity. Its shares, little changed on Monday, have fallen 10.5 per cent this year, less than the nearly 19 per cent fall for the benchmark FTSE 100 index.

The new job plans come during a bleak time for the UK and global labour market. Britain has shed almost 750,000 jobs during the pandemic. Economists worry that the number will rise sharply as the UK government winds down its job-retention scheme and companies choose to permanently reduce the size of their workforces. (Additional reporting: the Financial Times Limited)