Full-year profits at Penneys on course to top forecast 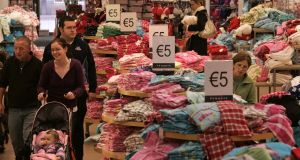 Full-year profits at Penneys will be “at least at the top end” of the company’s forecast £300 million to £350 million range due to a recovery in trading after stores reopened following weeks of lockdowns.

Parent company Associated British Foods said Penneys, which trades outside Ireland as Primark, would now need to carry over only about £150 million worth of stock into next year, and expected a “significant reduction” in the exceptional charge of £284 million previously booked against surplus inventory.

It will benefit from a recent weakening of the dollar as this will make clothing sourced from southeast Asian suppliers cheaper in sterling and euro terms.

“The average basket size was initially significantly higher than last year, reflecting some pent-up demand, and while this outperformance has reduced in recent weeks it remains higher than a year ago,” the company said in a statement, though it added that transaction numbers had also increased.

However, sales growth continues to be held back by a slower recovery in trading at city centre destination stores which are more dependent on tourist traffic.

Such stores contributed 13 per cent of sales before Covid-19 struck, but currently only account for 8 per cent of revenue. In the UK that meant cumulative sales since reopening were down 12 per cent rather than the 5 per cent that would have been the case if destination stores were excluded.

Sales in Europe were down 17 per cent cumulatively and in the US they were 9 per cent lower.

In ABF’s other businesses, the grocery division benefited from demand for flour and yeast, although this was partly mitigated by weak sales of Ovaltine, a malt extract drink popular in Asian markets, and the termination of a bread supply contract with Co-op in the UK.

Sugar profits are expected to be well ahead as a result of improved EU pricing and better crop yields in China, while ingredients profits “are now expected to be ahead of last year”.

The company expects to finish its financial year with net cash of £1.3 billion, up from a previous estimate of £750 million. It repaid a £1.1 billion revolving credit facility last month.

However the impact of Primark store closures during lockdown measures means that group net profit will be down significantly on last year’s £876 million. The chain had been on course to make more than £1 billion in profit this year. – Copyright The Financial Times Limited 2020