Sales down sharply compared to last year due to Covid-19, near-900 pub operator says 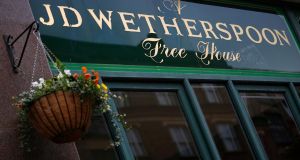 Wetherspoon, which has reopened 844 of its 873 pubs, says like-for-like bar and food sales have fallen 16.9 per cent.

Pub operator J D Wetherspoon on Monday forecast a loss for the year and said it was looking to seek waivers on its loans as it dealt with the financial fallout of months of coronavirus-driven pub closures and the social distancing steps since.

The company, which has seven pubs in the Republic and close to 900 in the UK, said sales had been helped by extra outside seating. Sales also received a boost from the UK government’s subsidised meal scheme but were still sharply lower compared with the year-ago period.

Sales are likely to fall further as the scheme winds down, Wetherspoon said, appealing to the government to maintain a lower value-added tax (VAT) rate for meals.

“The company expects to make a loss for the year ending July 26th, 2020, both before and after exceptional items. Some of these exceptional items will be related to the Covid-19 pandemic,” chairman Tim Martin said.

The company, whose cheaply priced pubs are a fixture of British towns and cities, had said earlier this month it would slash up to 130 jobs at its head office and scale back its expansion plans. – Reuters