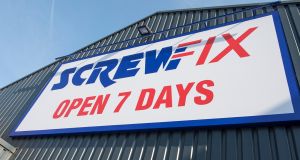 Screwfix, which is owned by DIY giant Kingfisher, has more than 600 stores in total with plans to grow this to 800.

Hardware retailer Screwfix, which opened in the Republic for the first time last December, has announced plans to open a further 10 stores by the end of 2021 in a move that will create 160 jobs.

The company already has outlets in Sandyford and Swords in Dublin, as well as in Ennis and Kilkenny.

In tandem with the new stores here, Screwfix said it also plans to open 30 new stores in the UK, with up to 300 jobs being created as a result.

Screwfix, which is owned by DIY giant Kingfisher, has over 600 stores in total with plans to grow this to 800. It has previously said it intends to open at least 40 shops in the Republic “in the coming years”.

Kingfisher, which also owns B&Q, has more than 1,360 stores in nine European countries and employs more than 77,000 people.

The group said its underlying sales jumped 21.8 per cent year-on-year in its second quarter to June 13th as its European stores emerged from coronavirus lockdowns, encouraging people to take on do-it-yourself projects.

For its year to January 31st, Kingfisher reported adjusted pretax profit that was down 5.2 per cent to £544 million on total sales down 1.5 per cent to £11.5 billion.