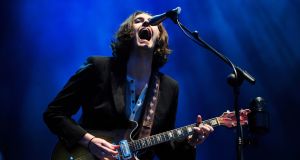 Hozier toured extensively in the US and Europe last year, promoting his Wasteland Baby! album.

Accounts filed by Haskey Ltd show the artist tripled his pay on the back of the success of his Wasteland Baby! album released in March last year and debuted at number one on both sides of the Atlantic.

The hike in pay for Hozier last year contributed to after-tax profits for the 12 months to the end of December 2019, decreasing by 73 per cent to €21,289.

Hozier toured extensively in the US and Europe last year, promoting his Wasteland Baby! album. However, Hozier – along with every other artist – has seen his income from live performance severely impacted by the pandemic .

A note attached to the accounts – signed off earlier this month – states that Covid-19 has resulted in travel and border restrictions, quarantines, supply chain disruptions, lower consumer demand, lockdown of economic activity and general market uncertainty. The directors believe that the company has sufficient liquidity to meet its obligations.