Sainsbury’s 'in the money' boss faces City critics at agm 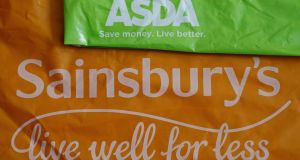 The regulator was adamant a combination of Sainsbury’s and Asda would lead to increased prices. Photograph: Reuters/Phil Noble/File Photo

Even someone with only a passing interest in financial news must by now be aware that Mike Coupe, chief executive of Sainsbury’s, is a big fan of musicals.

Coupe was captured singing We’re in the Money from 42nd Street last year as he awaited a TV interview on the group’s surprise £7 billion (€8.14bn) merger with Asda. The clip quickly went viral and Coupe, who said he was simply trying to “compose himself” ahead of the broadcast, was forced to apologise for his “unfortunate” choice of tunes.

With hindsight, the embarrassing incident served as an omen for the ill-fated get-together of Britain’s second- and third-largest supermarket chains. The deal was doomed from the start – and the Coupe clip was doing the rounds once again last week as the competition authorities finally torpedoed the transaction.

The regulator was adamant that a combination of Sainsbury’s and Asda would lead to increased prices and reduced choice for consumers. Much of the criticism for the failure of a deal that would have created Britain’s largest supermarket chain, overtaking Tesco in market share, has been levelled at Coupe personally.

During the year-long investigation into the merger, he adopted a combative stance against the regulator, challenging its initial findings and demanding additional time to submit information. The Sainsbury’s chief executive also failed to provide sufficient evidence to back his claim that shoppers would benefit from £1 billion of price cuts as a result of the deal.

Coupe will face his City critics Wednesday as he reports on Sainsbury’s performance over its past financial year. The figures are unlikely to be inspiring – while profits may rise, sales are expected to remain on the slide.

Industry data from Kantar Tuesday piled on the pressure, showing that Sainsbury’s was the only major supermarket chain to suffer a fall in sales over what was a bumper Easter season.

Sales dropped 1.2 per cent in the 12 weeks to April 21st, compared with a rise of 1 per cent for market leader Tesco. Asda sales rose by 0.3 per cent and Morrisons’s, the fourth of the Big Four, was up by 0.6 per cent.

However, the Kantar data showed all lost market share to the discounters, Aldi and Lidl, which now control a combined 13.6 per cent share of the market.

If he wants to keep his job, Coupe would be well advised to take a more conciliatory tone as he outlines his post-Asda “Plan B” – assuming he has one.

Clive Black, retail analyst at Shore Capital, was damning last week in his assessment of Coupe’s handling of the merger, blasting the Sainsbury’s chief executive’s behaviour as “juvenile and impetuous”. That should make for some interesting exchanges when the group holds its post-results briefing with analysts.

Investors, meanwhile, are smarting from the near-30 per cent plunge in the group’s shares over the past year and are demanding action. They won’t be happy with the sales performance, nor with the costs of the abortive merger. These amounted to £17 million over the first half and are thought to have since ballooned to £50 million.

At least now that the merger is dead, Coupe and his management team are free to concentrate wholly on their day jobs. He is expected to outline a “back to basics” strategy to restore Sainsbury’s fortunes as it continues to be squeezed by the discounters.

He’ll also be keen to show that the group is moving with the times.

Earlier this week, it opened the UK’s first till-free grocery store, in central London. Shoppers at the store, which is close to the group’s headquarters in Holborn Circus, use an app to scan products as they pick them from the shelves and then pay with their smartphones, avoiding checkouts altogether.

Coupe appears to have the backing of his board, for now at least. But it’s not just the discounters that are proving a problem for Sainsbury’s. There have been increasing complaints from customers about untidy stores and poor stock availability. These are they very basics of retailing and serve to underline the view that the management has taken its eye off the ball over the past year as they argued their case for the Asda deal.

It’s not known whether Coupe will be doing any TV interviews Wednesday but he’ll no doubt have learned his lesson about unguarded crooning in front of cameras. If he really needs to calm his nerves with a song, one of Cher’s hits would be more appropriate – If I could turn back time.