Profit up 33% at Declan O’Regan’s pub, hotel and restaurant firm 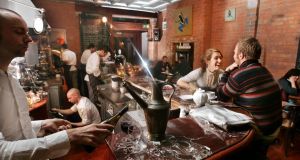 Pretax profits at the pub, hotel and restaurant firm operated by Declan O’Regan increased by 33 per cent last year to €1.33 million.

Accounts filed by O’Regan’s Telfer Ltd – which operates Hogan’s bar and L’Gueuleton restaurant on Dublin’s South Great George’s Street – for the 12 months to the end of May last show the sharp increase in pretax profits. Revenues climbed 5 per cent to €8.5 million from €8.1 million.

Mr O’Regan is a brother of the late entrepreneur and publican, Hugh O’Regan.

Operating profits at Telfer jumped by a quarter to €1.5 million and net interest payments of €170,735 resulted in the €1.33 million figure. At the end of last May, Telfer was sitting on accumulated profit of €8.3 million.

Numbers employed remained static at 95. But staff costs reduced from €2.5 million to €2.48 million.

Mr O’Regan also operates the nearby Drury Buildings, which houses a restaurant and cocktail bar. New accounts for that business show it recorded a pretax profit of €190,240 last year – a drop of 22 per cent on the 2017 figure of €244,061.

Pretax profits declined at The Secret Bar Ltd despite a 4 per cent rise in revenues to €2.54 million in the financial year to end-May last.

Numbers employed increased by three to 34.