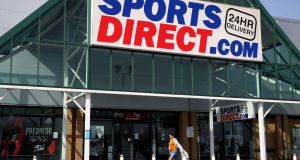 Sports Direct announced all its stores would remain closed after it faced a backlash to its earlier plan to keep them open despite a government order to shut all “non-essential shops”. Photograph: Nick Potts/PA

Sports Direct announced all its stores would remain closed after it faced a backlash to its earlier plan to keep them open despite a government order to shut all “non-essential shops”.

Staff were told in a message from Chris Wootton, chief finance officer, that since Sports Direct sold fitness equipment, it was “uniquely well placed to help keep the UK as fit and healthy as possible” and that its staff should be considered key workers.

“Thus our Sports Direct and Evans Cycles stores will remain open where possible to allow us to do this (in accordance with the government’s current social-distancing guidance),” he added.

Later the same evening, Mr Wootton sought “to clarify” the policy, saying in another message that the group’s stores would remain closed “until we are given the go-ahead by the government”.

The reversal came after Frasers drew criticism from customers and staff for risking public health should its stores remain open.

“By refusing to close its shops, Sports Direct has declared that money is more important than life. So please send Mike Ashley the only message he understands, by pledging never again to give him your money,” George Monbiot, the environmental activist, wrote on Twitter.

On Tuesday morning, cabinet office minister Michael Gove confirmed to the BBC that the company had asked the government whether its shops should continue operating: “We made it clear that was wrong. The management of that store has got the message.” – Copyright The Financial Times Limited 2020

1 If tourists are such pariahs should we not be testing them on arrival?
2 ‘My rent here is so low it’s a joke’
3 How to . . . keep your kids safe playing Fortnite
4 FC Barcelona to pursue Nike for compensation over defective shirts
5 EU court to rule on the Apple state aid case
6 Belgium helps Ireland to a Brexit boon
7 Indoor vertical farming is the future says Irish agritech start-up
8 The property developers who survived the crash
9 Over 2,000 march in Athenry in support of Apple data centre
10 Remote working: How to get ahead in a changed world
Real news has value SUBSCRIBE