Flutter scraps cash dividend as it sticks to Canadian merger

Company opts not to proceed with planned €112.7 million final dividend payout in cash 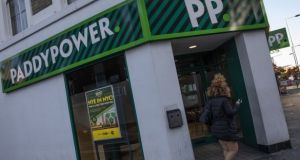 Paddy Power’s parent is to proceed with its merger with the Stars Group.

Paddy Power owner Flutter Entertainment has abandoned plans to pay a cash dividend, to help shore up finances for its merger ith Canadian online gambling giant The Stars Group (TSG). Flutter warned on Friday that an earnings hit from Covid-19 would result in the combined group having a higher debt burden than originally envisaged.

Still, Flutter chief executive Peter Jackson said he was “more convinced than ever” about the tie-up, which will deliver a more diversified group at a time when sporting events are being cancelled or postponed as government and health systems seek to contain spread of coronavirus and its devastating economic impact.

While the combined group was initially expected to have a debt burden of 3.5 times earnings, excluding synergies, the ratio is now likely to be higher than that, the company said as it published a prospectus and circular on the deal. Still, it remains committed to reducing its leverage to one to two times earnings “over the medium term”.

As a first move to keep the debt load in check, Flutter has decided not to proceed with its planned €112.7 million final 2019 dividend payout in cash, but will give shareholders the awards in additional shares instead. It has also scrapped plans to pay a dividend to Flutter shareholders this year before the completion of the merger.

“Given that both companies have already guided that these will significantly impact near-term performance, it is no surprise that leverage is no longer expected to be circa 3.5 times on deal completion,” said Davy analysts Michael Mitchell and Jack O’Halloran in a note to clients.

Flutter entered into a new £1.3 billion (€1.45 billion) debt arrangement with its lenders earlier this month to refinance some existing Flutter and TSG debt when the deal is completed.

“In due course we will look to refinance the remaining debt and we remain confident that this will drive material financing synergies for the combined group over time,” the company said.

“The Flutter board believes that the combined croup will have a robust financial profile given its strong cash generation in conjunction with expected cost, revenue and financing synergies.”

Still, the Dublin-based company said the disruption caused by Covid-19 to the global online betting and gaming sector “is expected to impact the financial profile of the combined group in the current financial year”.

TSG owns Poker Stars, Full Tilt and Sky Bet, while Flutter’s brands include Paddy Power in the Republic, Sportsbet in Australia and FanDuel in the United States.

Shareholders in both Flutter and TSG will vote on the deal on April 21st.