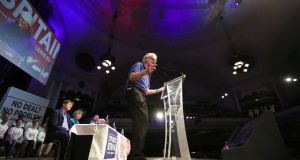 Profits at JD Wetherspoon are to come in lower in the first half of the year after the firm was stung by a rise in costs, taking the shine off a stellar rise in sales.

However, costs have rocketed, especially labour, which has increased by about £30 million (€34 million) in the period.

Wetherspoon said that pre-tax profit in the first half is expected to be lower than the same period last year.

The company’s Brexit-backing chairman Tim Martin said: “Sales growth has been strong since our last update. Costs, as previously indicated, are considerably higher than the previous year, especially labour, which has increased by about £30 million in the period, but also in other areas, including interest, utilities, repairs and depreciation.

“Profit before tax in the first half is expected to be lower than the same period last year. Our expectations for the full year are unchanged.”

10 If tourists are such pariahs should we not be testing them on arrival?