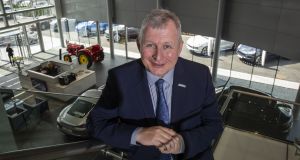 The Joe Duffy Group, Ireland’s largest motor dealer network, recorded a 2.5 per cent rise in profits to €8.87 million last year, on turnover of €294 million. It was the ninth consecutive year of profit growth for the group and came against a backdrop of a new car market declining 4.4 per cent.

Used vehicle sales at the group were up 5 per cent to €131 million, while aftersales turnover rose 14 per cent to €39 million, for the year ended December 31st 2018.

According to the accounts, during the year the group invested €35 million in three new dealerships at a site in north Dublin, comprising new Volkswagen, BMW and Porsche showrooms. It also acquired Motorpark Athlone, which included a Ford and Volvo franchise in September 2018.

In total the group operates 21 franchises for 17 car brands at 20 locations in the Republic. While the accounts show the average number of employees as 435, group chief executive Gavin Hydes told The Irish Times the total number employed is now over 450.

With some motorists opting to finance their new cars through personal contract plans (PCPs), the group has a commitment to repurchase the vehicles at agreed residual values should the customer choose this option. At the end of 2018 it was committed to buying back 568 vehicles to a total value of €7.9 million.

Commenting on the state of the Irish car market, the directors’ report notes there is considerable uncertainty “due to the economic effects of Brexit, the weakening of sterling and the high level of VRT [vehicle registration tax] applied to new cars. These issues have resulted in a record number of passenger cars being imported from the UK; a large amount of these UK imports are older diesel vehicles which are significantly less environmentally friendly than newer petrol or diesel vehicles.”

The directors say that without a change in the Government’s position on taxation and VRT, this will continue. “Newer cars have the most up-to-date emission technologies and are less environmentally damaging than older used cars. What is required is a reform of our VRT system for new cars which will incentivise new car purchases, improve emissions, increase the Government taxation revenue on new vehicles compared to imports and most importantly, protect the jobs in our industry.”

In an interview with The Irish Times, Mr Hydes said: “We have a 2020 strategy. We’re not far off it, but the plan was 22 businesses, 700 employees and €500 million turnover. If the new car market had been where it should have been over the last four years, we’d have achieved our targets.”