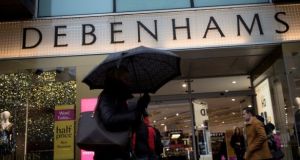 Struggling department store group Debenhams on Thursday named turnaround specialist Stefaan Vansteenkiste as its new chief executive, promoting him from the chief restructuring officer role he took on in April.

The group went into administration in April, wiping out equity investors, and is now owned by lenders’ consortium Celine UK Newco 1 Ltd.

Since he joined A&M in 2003 he has been involved in a range of turnaround situations, including chief executive and other roles at Intertoys, Vion Food Group, Diam International and Bally Shoes.

“The retail industry faces a challenging environment and everyone at Debenhams acknowledges that. But we have a clear plan,” he said.

Debenhams also said interim executive chairman Terry Duddy would step down from the board in September.