New car sales down 4.8% in January as diesel sales slide 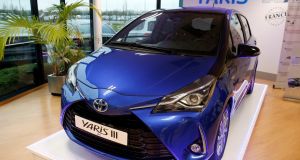 Amid the growing backlash against diesel engines internationally – and political promises to ban them in the Republic by 2030 – sales of this engine format have fallen 17 per cent on last year, and now represent 57 per cent of the new car market. Petrol engine sales have increased, making up 36 per cent.

But the most significant growth has been in hybrids, where sales are up 73 per cent, pushing the market share to 6.26 per cent. The increased interest in hybrids particularly benefitted Toyota, whose chief executive Steve Tormey told The Irish Times that only one in five of its cars sold in January were diesel.

Despite new benefit-in-kind incentives unveiled in Budget 2018 to promote electric cars, sales have actually fallen – from 168 in January last year to just 104 this year. It means electric car sales now represent just 0.28 per cent of the new car market.

Some of this may be attributed to consumers waiting for the arrival of new models, such as the new Nissan Leaf, which is due on forecourts in the coming weeks. According to Alan Nolan, director general of the Society of the Irish Motor Industry, the decline “is a timing issue with supply and later new model delivery dates. The sector remains confident that electric vehicle registrations will increase significantly in 2018.”

While the overall market has fallen, the largest sales growth was recorded by Peugeot, with sales up 71 per cent on this time last year, at 1,517 registrations, pushing the brand into the top 10 best-sellers for the first time in several years and giving them market share of just over 4 per cent.

Explaining the Volkswagen’s drop from the best-selling brand in 2017, to fourth place in January, VW Ireland’s brand director Gerrit Heimberg said: “If you look back over previous years, we have traditionally had a slower start than some other brands in January. This is because Volkswagen has a higher share of [customer’s choosing bespoke vehicles] and Volkswagen has a higher [company car] fleet share of the market than other volume brands and these are often delivered across a wider timescale.”

The biggest drops among the mainstream brands were recorded by Opel and Renault, down 37 per cent and 15 per cent respectively. Opel has slipped out of the top 10 in terms of sales. Among the top 10 best-selling brands only Peugeot, Kia and Skoda recorded sales growth in January.

The Republic’s most popular new car remains the Hyundai Tucson, with 1,624 sales in January, followed by the Nissan Qashqai with 1,418, and the Ford Focus with 1,229. The best-selling premium model is the Mercedes-Benz E-Class with 539 registrations, followed by the BMW 5 Series with 449.

January traditionally represents more than 25 per cent of the total annual new car sales so the drop in sales is significant indicator for the year ahead. Another worrying sign is the scale of last-minute registrations. More than 12 per cent of all new car registrations last month occurred on Wednesday, the last day of the month. Renault, for example, registered 30 per cent of its entire January sales on the last day. Patrick Magee, country operations director, Renault Group Ireland attributed the late rush to a “stronger than usual retail offer which ended on January 31st” and the cars had to be ordered and registered by that date to avail of the discount.

Last-day registration often signals that the new cars are being registered by either the national distributor or dealers in order to meet sales targets or in order to sell the cars in the coming months at a slight discount as ex-demo models.

According to James Brooks, managing director of Kia Motors Ireland: “The year ahead will be challenging particularly for those manufacturers who may have an overhang of pre regs from last year added to those from the month just gone.”

Diesels are also more popular among those importing used cars, making up 78 per cent of the market. And in contrast to new car sales, there has been a growth in the number of used electric cars, with 51 brought into the Republic last month.

Volkswagen Ireland’s brand director Gerrit Heimberg said: “Used imports are no doubt a challenge, but this is not a new situation for us. We have seen this trend over the past 18 months, and we expect a stabilising import level.”

Other statistics show that grey remains the favourite colour of new car for the Republic’s motorists, making up 38 per cent of sales, ahead of black with 17.6 per cent, and white/ivory with 14.6 per cent.

There was better news on the commercial front with the sales of light commercial vehicles – often regarded as a bellwether for economic activity – up 6.3 per cent on January last year. New van registrations totalled 6,728 last month, led by Ford with 1,622 sales, Volkswagen with 1,307 and Renault with 1,096.

However, in the heavy commercial vehicle market, sales fell 11.8 per cent on the same month last year, with 402 registrations. The truck market is led by Volvo with 86 sales last month, followed by Scania with 78 and Daf with 73.