Turnover up at Ann Summers Irish unit as losses mount 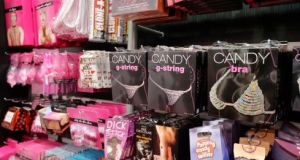 The company, which caused outrage when it first opened for business opposite the GPO on O’Connell Street, Dublin, almost 19 years ago, sells a wide range of lingerie, apparel and adult toys

Revenues at the main Irish subsidiary of Ann Summers, which operates a number of so-called “pleasure emporiums” in Ireland, reported a jump in turnover last year as it opened a fifth store locally.

Turnover for Ann Summers Ireland (Retail) Limited rose to €3.2 million from €2.4 million during the 12 months to the end of June 2017.

The company, which caused outrage when it first opened for business opposite the GPO on O’Connell Street, Dublin, almost 19 years ago, sells a wide range of lingerie, apparel and adult toys.

The O’Connell Street store opened amid widespread protests in 1999, with the level of anger being such that chief executive Jacqueline Gold received a bullet in the post. The flagship store closed after it moved to Henry Street in early 2016.

The company also has stores in the Blanchardstown Shopping Centre, Cork, Limerick and Longford town. Overall, the group has 140 shops across UK and Ireland.

Overall, the group employed 44 people at the end of the reporting period with staff-related costs totalling €760,232, up from €544,354 a year earlier.

Net assets at the end of June totalled €1.2 million, as against €2.1 million in the prior year.