Imports now account for over 20% of Republic’s total vehicle fleet, according to figures from cartell.ie 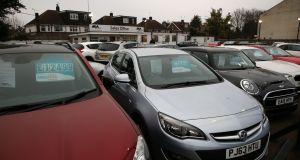 Driven by the fall in the value of Sterling, imports surged last year to a record 93,000 cars

Nearly 500,000 used or privately imported vehicles are currently on Irish roads, representing over 20 per cent of the entire fleet in the Republic. Figures from vehicle history checking service cartell.ie show 487,492 imports were registered in the State on January 1st. During the same period the size of the so-called native fleet - vehicles first registered in the Republic - stood at 1,784,716.

Driven by the fall in the value of Sterling, imports surged last year to a record 93,000 cars. Overall, taking into account cars scrapped or otherwise taken off the road, the total number of imported vehicles in the Irish national fleet rose by 43,275 during 2017. Looking at the same figures for the ‘native’ fleet shows that, in spite of 131,000 new cars being sold here in 2017, the total number of original Irish registrations fell in 2017 by 53,857.

It represents the highest number of imported vehicles on Irish roads since Cartell started recording the figures 18 years ago. In 2000 there were just 40,483 imports in use on the Republic’s roads, out of a total of 1.24 million vehicles. In 2008, on the cusp of the recession, the import figure stood at 217,766.

According to John Byrne of Cartell.ie: “The impact of imports has been noticeable in 2017 as owners retire native vehicles and look to replace them with imported vehicles in ever increasing numbers. We would see imports remaining strong in 2018 alongside a curb in demand for new diesel vehicles. While hybrid and electric vehicle sales will continue to dominate headlines with analysts waiting for a headwind to bring in larger numbers of sales it’s still likely the dominate theme for 2018 will be imports.”

The latest figures for this year seem to support his analysis, with 8,375 imports registered in the State up to January 29th, a 19 per cent rise on same period last year.