Monsoon Accessorize falls into the red in Ireland as rents bite 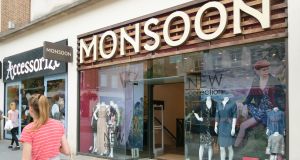 Womenswear retailer Monsoon Accessorize saw profit at its Irish arm fall into the red after it booked an exceptional charge having reassessed lease agreements on its property portfolio.

Recently filed accounts show Monsoon Accessorize Ireland Limited recorded a €136,570 loss for the year ended August 25th 2018 on the back of a €259,552 charge follow the property portfolio review. That compares to a €305,368 profit the previous year.

The fall into lossmaking territory comes as the group’s UK parent goes through a major restructuring which has already resulted in negotiations with landlords for rent reductions.

And while the Irish arm was initially not affected by the UK CVA, the move was subsequently challenged on August 4th. The directors of the Irish company said that while the challenge will likely come to nothing, if it is successful, the group will face “liquidity and solvency challenges and may fall into administration”.

Auditors BDO noted that the company is supported by its €4.4 million “inter-company receivable” with its UK parent. “The company’s operations are intertwined with Monsoon Accessorize Limited in various ways and are not easily or immediately separable,” they added.

Sales across the eight stores, in locations including Dublin, Galway, Limerick, Cork and Sligo, dipped almost 5 per cent to €12.3 million, although directors said “the ladies brand performed well”.

“The continued focus on reducing costs and an improved gross profit performance demonstrate the business’s steady overall trading performance in the year,” they added in a note accompanying the accounts.

While the company, ultimately controlled by British businessman Peter Simon (70) through a British Virgin Islands entity, had cash in the bank and at hand of €2.6 million at the year end, it also owed €2.5 million to creditors. It employed 77 staff during the period and had wage and salary costs of €2.3 million.

Earlier this month, Monsoon’s chief executive, Paul Allen, announced his departure from the company having led it through the CVA process which resulted in a reduction in rents at 135 of the company’s outlets. At the time, the company said no stores were earmarked for closure.

1 Who are Ireland’s 17 billionaires?
2 My father in a nursing home wants to gift me his house
3 State subsidises public sector retirees to cover gap until State pension
4 Are there annual limits on inheritances or gifts to a child?
5 Swiss police suspect Davos plumbers of being Russian spies
6 Q&A: Why has the pension age question suddenly become an election issue?
7 O’Flynn says subsidiary ‘mistakenly ’ sought permission for student apartments in Birmingham
8 Davos Diary: Chilly reception for Trump’s ‘prophets of doom’ speech
9 Property firm sues engineering company over waterproofing of basement
10 Disney Plus available to Irish subscribers the week after St Patrick’s Day
Real news has value SUBSCRIBE