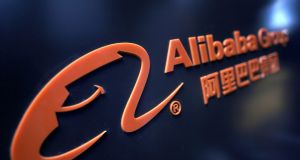 Cloud revenues were up strongly at Alibaba. Photograph: Reuters

China’s Alibaba trumped analysts’ expectations with a strong rise in sales, contrasting with its rival Tencent which one day earlier disappointed the market by falling short with a more modest quarterly growth.

The tech giant reported a 42 per cent year on year jump in revenues to Rmb114.92 billion (€14.7 billion) in the three months to June, driven by a rise in China retail, along with food delivery service ele.me – which was consolidated in May last year – and cloud.

While Alibaba and Tencent are both tech conglomerates, Alibaba has its roots in ecommerce and has ridden the wave of rising online shopping while also coming under less regulatory pressure from the likes of gaming and videos.

Net profit attributable to shareholders came in at Rmb21.25 billion. That was heavily above the year-ago figure of Rmb8.68 billion, which was dented by an employee share compensation from payments affiliate Ant Financial following a fundraising that ratcheted up its valuation. Stripping that out that impact, operating profit would have been up 27 per cent.

Revenues from cloud, a key area of growth for Alibaba, as it has been for US peer Amazon, was up 66 per cent at Rmb7.8 billion as users increased their spending. However the unit continues to lose money, at a rate of 5 cents for every dollar. – Copyright The Financial Times Limited 2019