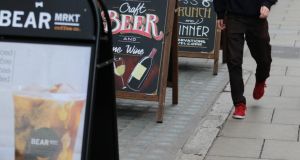 Plans by Dublin City Council to introducing a licensing system for sandwich boards in the city centre have been criticised by a representative group of small businesses and a number of independent traders.

The Gutter Bookshop in Temple Bar has used a sandwich board since opening 10 years ago. Owner Bob Johnston understands the need to tidy up Dublin’s streetscape but said the €630 annual licence fee was not the right solution.

“When I saw the letter that had come in saying we could retain our sign as long as we paid €630 per year, I was somewhat shocked,” he said.

The letter stated the business must remove its board by September 1st or pay the fee.

Mr Johnston said his business would be taking its sign off the street. Coupled with high business rates already paid to the council, the licence fee is beyond its reach.

“It’s a shame this is the method Dublin City Council has chosen to go with because small independent businesses are already struggling to retain customers and attract people,” he said.

“I think it’ll remove 90 per cent of signs from the streets. It just concerns me that the 10 percent that will remain will be people who can afford to pay that amount of money each year, rather than those best suited to having the signs.”

Mr Johnston said a blanket ban would be more beneficial to alleviate street clutter, and hopes the council will offer alternative ways to support and promote Dublin’s independent businesses.

“Pedestrians are forever dodging all kinds of signage. There is a need to solve the problem,” he said. “I’m just not convinced the €630 fee is the answer.”

Sven Spollen-Behrens, director of the Small Firms Association, said while there was a need to improve the streetscape “a charge is a most unimaginative solution”.

He noted that obtaining a licence requires a €100 application fee in addition to the charge itself. “In light of Brexit we must avoid anything that puts extra pressure on small businesses, and the new licensing system adds to the cost of doing business,” he said.

Kevin Meade of Dublin City Council said the implementation of the licensing system was in response to a recent “explosion” of sandwich boards around the city. He said some businesses have up to three signs blocking the street, resulting in complaints from many people, particularly those with a disability.

Mr Meade said the signs were “an invaluable asset” for certain businesses, such as those located on the second floor of a building without a shop front.

He said certain streets would be designated as unsuitable for the boards, and businesses located there will not be granted a licence. He said businesses would be invited to apply for a licence after the council has assessed where they propose to locate their sign.