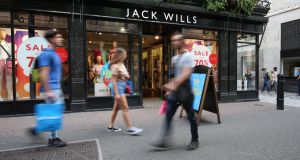 Sports Direct has closed eight Jack Wills shops in the UK and may shut more if it cannot reach agreement with landlords on lower rents.

The shops that have closed are in Marlborough, Derby, Reigate, Rock, Tunbridge Wells, Durham, Kingston and St Albans. Sports Direct said on Thursday that it would endeavour to redeploy the staff affected elsewhere in the group.

The casualwear company, which Sports Direct acquired out of administration for £12.8 million (€13.8 million) this month, has about 98 outlets. Many are on high-profile sites in relatively expensive towns and cities.

Two of them – the original shop in Salcombe plus a unit in Downham Market – are still co-owned by the group’s founder, Peter Williams.

“They took super-prime locations where the sales just didn’t justify it,” he added. “They need to focus on their roots as a lifestyle brand.”

He predicted that what he described as the “varsity, collegiate” look would come back into fashion at some point and that Sports Direct would look to expand the brand’s wholesale business. “If you were starting Jack Wills from scratch, that’s what you’d do.”

Because Jack Wills was bought out of administration, it continues to occupy shops on licence from the administrators until new lease agreements can be struck, giving its new owners an opportunity to demand deep cuts to rents and changes to other lease terms.

Sports Direct has pursued a similar course with Evans Cycles and House of Fraser, which were also acquired from administration, although it has since acknowledged that some House of Fraser shops were not viable even at zero rent.

The closures come after KPMG revealed that Jack Wills went into administration because neither of the final two bidders – Sports Direct and the Dubai-based retail tycoon Philip Day – were prepared to cover £10 million worth of liabilities set to fall due in the four to five weeks after a sale.

The group’s previous owners, private equity group BlueGem, along with main lender HSBC, had already informed the company they were unwilling to provide further funding.

1 Michael Smurfit: ‘I asked Trump to invite me to the White House for my 80th birthday’
2 ‘I’m so lucky to be in the Caribbean – a million miles from Derry Girls’
3 Small businesses are cannon fodder in zealous anti-virus experiment
4 Irish business of Carluccio’s restaurants to be wound up
5 Four things that could help Ireland escape from the Covid-19 recession
6 Tax and the Pandemic Unemployment Payment: Your questions answered
7 ‘The recovery needs to be a full-scale economic renewal’
8 Household savings soar as consumers stop spending
9 Investor alleges fraud over collapse in property fund value
10 How to . . . move (almost) everything to your new phone
Real news has value SUBSCRIBE