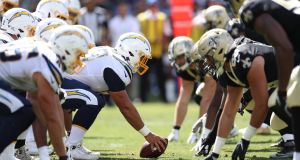 Flutter’s US subsidiary, Fanduel, has been expanding as individual states have legalised betting on sports. Photograph: EPA/Peter Joneleit

Paddy Power owner Flutter Entertainment is poised to take a punt on the American midwest in time for the kick-off of one of the United States’ biggest sports tournaments, the National Football League (NFL).

Flutter’s US subsidiary, Fanduel, has been expanding as individual states have legalised betting on sports such as football, basketball and athletics following a federal supreme court ruling last year.

Fanduel and partner, casino operator Boyd Gaming, plan to open four sportsbooks – the equivalent of bookie shops – in casinos in the midwestern states of Iowa and Indiana this month and in early September, shortly before the NFL kicks off.

While Flutter, which has its headquarters in Dublin, is focused on growing its online business in the US, its subsidiary there also needs a physical presence in each of the states in which it begins offering sports betting. It has joined forces with Boyd to provide this in many of them.

Iowa and Indiana will be the 11th and 12th jurisdictions to legalise sports betting since May 2018, when the US supreme court shot down a federal law banning individual states from taking this step.

According to US trade publication, CDC Gaming Reports, Fanduel will begin sports betting in Boyd’s Diamond Jo Casino in Northwood, Iowa, on August 29th and six days later at its property in Dubuque in the same state.

Fanduel will open in Boyd’s Blue Chip resort in Michigan city, Indiana on September 5th and on September 9th in a casino in Florence, Indiana.

Flutter was one of the first out of the traps when the US supreme court ruled last year. It bought Fanduel within days of the verdict, which positioned it to recruit customers, and then signed deals that gave it a presence in New Jersey, which led the way on legalising sports betting.

Flutter owns businesses in Europe, the US and Australia, including bookmaker Paddy Power and betting exchange Betfair.

1 Owner of Dundrum Town Centre to sell prized assets
2 Can a first-time buyer get relief on a buy-to-let home?
3 Irish clothing entrepreneurs: sustainable, affordable and ethical
4 Google unveils ‘budget’ Pixel 4a after Covid delay
5 Pilita Clark: Working from home is starting to pall
6 Thousands back petition demanding State aid for Aer Lingus
7 New road signs with parity for Irish may be introduced
8 Oprah wore my dress to the Oscars to pick up a lifetime award
9 Law governing construction pay rates remains pending State appeal
10 Office rentals in Dublin halved in opening six months of year due to Covid-19
Real news has value SUBSCRIBE