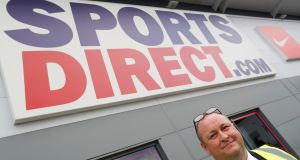 Mike Ashley, founder and majority shareholder of Sports Direct, who is once again under fire from shareholder advisory groups ahead of the company’s AGM next month. Photograph: Darren Staples/Reuters

Sports Direct is facing an investor revolt against its board at its annual general meeting in September as the retailer fights to avoid becoming the first major listed UK business to fail to appoint an auditor.

Shareholder advisory service Pirc has recommended that investors vote against the company’s senior management, citing concerns over the delayed publication of its annual results, the disclosure of a £605 million Belgian tax bill and a decline in its share price in the past month of nearly 50 per cent.

Pirc has urged independent shareholders to oppose the re-election of Mike Ashley, the billionaire tycoon who is the group’s founder and chief executive, David Daly, its chairman, and three of its four directors, Richard Bottomley, Nicola Frampton and David Brayshaw. It did not oppose the election of Cally Price, the company’s employee representative on the board.

Pirc, one of the UK’s largest pension and lobby groups, said Mr Daly, who became chairman last September, did not have “sufficient experience in a public company” to continue in the role. Mr Daly is a non-executive director at Fulham Football Club and a former executive at Nike. Pirc said Mr Bottomley, Mr Brayshaw and Ms Frampton, who sit on the audit committee, did not detect the tax liability or report it to the external auditors, which could result in the company being fined.

Sports Direct did not respond to a request for comment.

Glass Lewis, the second-largest proxy adviser in the world, sounded a warning about an “audit succession crisis”, which could result in the company failing to appoint an auditor, in its report to investors.

Its decision has left Sports Direct struggling to appoint a replacement as it admitted that it had not previously persuaded rival accounting firms to tender for its audit contract. Each of the largest firms have cited concerns about reputational risk or claimed to be conflicted in pitching for the work.

Sports Direct has started early discussions with Mazars and MHA Macintyre Hudson, two mid-tier accounting firms, in recent weeks, and also approached the UK government to ask how it might act if it fails to find an auditor.

Glass Lewis said investors should vote against Mr Ashley’s re-election as chief executive. It said he was “inextricably linked with myriad controversies, past and ongoing” and there had been “serious reputational damage” to the business.

Sports Direct has had several years of revolts at its annual meetings. Keith Hellawell, its former chairman, stepped down ahead of an expected rebellion at its AGM last year. He had faced criticism from investors since 2015 amid a political row over working conditions for its staff at its shops and warehouses.

An attempt to pay Mr Ashley’s brother £11 million in back pay for his previous role as the company’s IT director was blocked by shareholders in December 2017.

Sports Direct’s shares stood at 246.6p when markets closed for the bank holiday on Friday, among their lowest levels since 2011. The retailer made profits before tax of £179.2 million for the 12 months to the end of April, up from £61.1 million the previous year. Revenues rose to £3.7 billion from £3.4 billion. Mr Ashley owns 61 per cent of the company’s shares. – Copyright The Financial Times Limited 2019