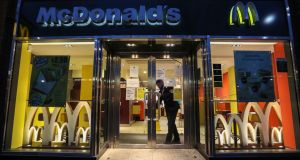 The European parent company of the McDonald’s Irish operation injected €75 million into its business here to pay off its bank overdraft, according to a recently filed financial statement. Accounts for McDonald’s Restaurants of Ireland also show the company has shifted its tax residency from this State to the UK.

McDonald’s, which on Wednesday reopened 27 of its Irish stores for dine-in for the first time since the coronavirus shutdown, had a network of 90 Irish stores at the date of the accounts, which are for 2018.

The accounts were only signed off during the pandemic on June 26th last. A note to the statements shows that the Irish unit declared a dividend to its European parent of €20 million in October 2019.

The directors note that “management and control” of its Irish operation shifted from Ireland to the UK in January 2018, effectively changing its residency. The Irish unit’s tax bill for the year consequently doubled to almost €10 million, although half of this remained payable in this State on its property activities here, with the balance paid in Britain.

Turnover fell by 16 per cent to €73.6 million as a result of its transferring three of its five company-operated outlets to franchisees. All but two of its 90 Irish outlets are now operated by franchisees, it said. Profits after tax came in at €1.3 million, also a drop of 16 per cent.

Total staff numbers at the unit fell from 675 to 342, again due to the fact that it transferred restaurants to independently-owned franchisees. Shareholders’ funds on the balance sheet more than quadrupled to €102 million, but this was mostly due to the parent’s cash injection, which wiped the Irish unit’s bank overdraft from about €72 million to zero.

The accounts signed off last month include several references to the pandemic, which caused McDonald’s in the UK and Ireland to shutter all stores initially, even though, as a takeaway, it was legally allowed to operate here under pandemic regulations.