Fall of 15% to 20% expected in second quarter, company says 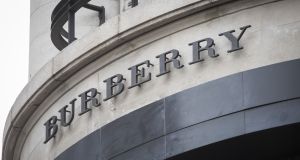 Fashion brand Burberry said on Wednesday that demand was severely impacted by Covid-19 in the first quarter, with comparable sales falling 45 per cent, although the decline eased to 20 per cent in June driven by growth in mainland China and South Korea.

Chief executive Marco Gobbetti said it would take time for luxury demand to return to pre-crisis levels with the resumption of overseas travel, but he was “encouraged by the improving trends in all regions and the promising exit rate for June”.

Analysts had expected first-quarter like-for-like sales to fall 49 per cent, according to a company-compiled consensus.

Burberry said it expected revenue in its second quarter to remain impacted by the pandemic, with negligible tourists flows hitting sales from travelling shoppers and some of its stores remaining closed and others operating with reduced hours.

It said that based on the 20 per cent decline recorded in June it expected to see a decline of 15-20 per cent in its second quarter.

Burberry reported total retail revenue of £257 million down 48 per cent, in its first quarter. – Reuters