KPMG seeking up to 350,000sq ft of office space in Dublin

Accountancy firm plans to bring 2,500-plus Dublin staff together under one roof 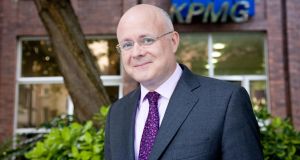 KPMG occupies two buildings in the capital, one in Stokes Place, at the St Stephen’s Green end of Harcourt Street, the other in the IFSC.

The accountancy practice has begun seeking a single building to house the 2,500 or so people it employs in Dublin in one place. While the firm has yet to work out the exact scale of building it needs, the final figure could be between 250,000sq ft and 350,000sq ft.

KPMG has hired Declan O’Reilly, of estate agents Knight Frank, to advise the accountancy practice on the move, which could spark considerable interest among developers.

Builders planning to develop offices in central Dublin could be keen to secure the accountancy firm as a tenant for individual projects ahead of completing work.

At today’s rates, depending on its final choice, the space that KPMG seeks in Dublin could cost it anything between €12.5 million and €21 million a year in rent.

Offices in the capital’s central business district, which includes locations such as St Stephen’s Green, are running at €60 per square foot a year at the moment, which would leave the firm with a €21 million bill for 350,000sq ft.

However, it is likely that, as KPMG would have considerable bargaining power and as it is willing to take that quantity of space, it would be able to strike a favourable deal, paying closer to €50 per square foot, or between €12.5 million and €17.5 million a year.

In 2013, the company looked at moving from Stokes Place to a new headquarters where it could accommodate all its then 1,600 staff.

Ultimately, after reviewing its options, the firm decided to renew the lease at Stokes Place in January 2014 until 2026. The IFSC lease was also extended. At the time, managing partner Shaun Murphy said the decision was supported by feedback from clients and staff that the Stokes Place premises was an excellent location in terms of profile and access.

Mr Murphy said on Wednesday that the time was now right to begin planning for a new home. “While our current buildings have served us well, it is now time to look to the future and plan accordingly,” he said.

KPMG earned €377million fee income in 2017. The firm has grown its workforce by 60 per cent in recent years to more than 3,000 people in offices in Belfast, Cork, Dublin and Galway.