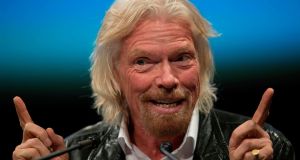 The first tickets go on sale this week for Virgin Voyages, a Miami-based cruise operator aiming to launch the first of the four ships it is building early next year. Within days, a group of New York banks are expected to price a potential $3 billion (€2.6 billion) initial public offering of Virgin Trains, a new passenger rail service in Florida.

By the end of February a Virgin Hotel will open in San Francisco and a Virgin Galactic space aircraft hopes to make its second test flight from California’s Mojave desert to the edge of space. The Long Beach-headquartered Virgin Orbit plans to celebrate the launch of its first commercial satellite by the summer.

As it prepares to mark the 50th anniversary of Sir Richard Branson founding Virgin as a mail order records business in 1970, the executive who now runs the company is laying out ambitious plans to push into a US market where the brand has been far less well-known – and lucrative – than in the UK.

Josh Bayliss, a Slaughter and May-trained New Zealander who stepped up from general counsel to chief executive in 2011, says he has tried to bring focus to a private group that still spans 68 companies in 34 countries.

At times in Virgin’s first 49 years, it has seemed unclear what held its portfolio together other than the whims of its founder. Mr Bayliss says Virgin is now “more deliberate” about where it applies its brand than in the days when Sir Richard was launching cola, vodka, cosmetics and bridal wear under the motto “screw it, let’s do it”.

“There’s a misconception of Richard as someone who [just] slaps the brand on things,” he adds, contrasting Virgin with another brand-focused multinational that was fronted for years by a stunt-loving billionaire: “It’s very different from the way the Trump Organisation works.”

Virgin has also become more focused on finding financial partners with longer-term investment horizons, such as sovereign wealth funds and pension funds, and on picking industries where it sees the potential to build multibillion-dollar businesses by offering a better experience for “underserved” consumers.

The US, as the world’s largest consumer market, has obvious appeal. But it took an apparent retreat to fund its current advance: in 2016 Alaska Air paid $2.6 billion for Virgin America, the domestic airline the UK group had launched in an earlier bid for bigger US revenues.

Sir Richard, with just over 30 per cent of what was then a public company, lamented that he was powerless to stop the sale and later implied that Alaska had “castrated” the carrier by dropping the Virgin name. But the transaction provided Mr Bayliss with capital to explore other opportunities for the brand in the US, and the pending £220 million sale of a 31 per cent stake in Virgin Atlantic to Air France-KLM will add further resources.

Virgin has invested $2.3 billion since 2008 in the US, Mr Bayliss says - most of it in Virgin America. The recent ramp-up of investments means Virgin is losing money in the US, but it expects a substantial payback over the next five years. Virgin Voyages, the cruise business backed by Bain Capital and GIC, Singapore’s sovereign wealth fund, has required $150-$200 million. It has also put $75m-$100m into Virgin Hotels, which so far has only one property opened in Chicago but plans to open nine in the next three years, from Nashville to Las Vegas.

Listing documents for the Fortress-backed Virgin Trains, in which Virgin will have no more than a 2 per cent stake, suggest its investment there could be $50-$60 million. And then there are the much delayed space launches, into which Sir Richard said last year he had poured about $1 billion of his own money and which Mr Bayliss says could still require “significantly more capital”.

It is difficult to confirm such sums from the published accounts of offshoots of Virgin Group Holdings, the private parent company which is registered in the tax efficient British Virgin Islands where Sir Richard resides. However, they offer a picture of a group that is still heavily dependent on the UK, 35 years after the first Virgin flight across the Atlantic.

In the latest accounts for Virgin Enterprises Limited, for example, the subsidiary that oversees the high-margin licensing of the Virgin brand made £40 million of its £73 million turnover from the UK in 2017 and only £7.3 million from North America – less than the sum it generated in Australia and New Zealand.

Such accounts note the companies’ vulnerability to any decline in the perception of the Virgin brand, and the group’s efforts to crack the US have had to overcome the shock of a fatal crash of an earlier Virgin Galactic test flight in 2014.

“It was a terrible, terrible accident from a human point of view” and cost the business “hundreds of millions of dollars” to rebuild the spacecraft, Mr Bayliss says, but he argues that it also made the team more resilient. Sir Richard owns 80 per cent of the US company, with Mubadala of Abu Dhabi owning the rest, so the entrepreneur bore most of the estimated $300-$400 million cost of the crash.

After many delays, Mr Bayliss will not predict when the first passengers will be able to gain a new perspective on our planet, but he notes that one person - an oil executive making weekly trips from London Heathrow to Lagos - has earned a free flight to space by racking up 1m air miles on Virgin Atlantic.

Virgin and Delta Air Lines announced last year that they would combine the UK airline’s Flying Club loyalty programme with Virgin Red, which offers rewards to people spending money with companies in the group, from Virgin Media to Virgin Balloon Flights. “Now you’ve got not just a membership club but a currency,” says Mr Bayliss, who sees the new programme creating more “connectivity” between the group’s businesses.

It could also extend the brand further if Mr Bayliss achieves another of his goals: to find a partner for a US version of Virgin Money, the financial services brand it operates in the UK with Clydesdale Bank, in Australia with Bank of Queensland and in South Africa with Absa Bank.

“They’ve been great businesses for us to invest in. That’s the sort of thing we’d look to replicate in North America,” he says, skipping over an earlier, shortlived foray into US peer-to-peer lending using the Virgin Money brand.

Virgin is actively looking at financial services opportunities in North America, with a preference for building on an existing current account platform where it can improve the experience for customers wanting “something a little more exciting and interesting”, Mr Bayliss says. He hopes to seal a Virgin Money US deal this year, but the group has not yet found a likely partner.

With Virgin’s longer-term aspirations for the US including radio stations and hyperloop transportation systems, it adds up to a dizzying wish list, but Mr Bayliss insists its US expansion can be coherent.

“We have got huge amounts of skin in lots and lots of games, all of which, I think, link to one another in a sensible way,” he says.

Virgin and Stagecoach were stripped last year of the franchise for operating train services on the UK’s East Coast route between London and Scotland after breaching a financial covenant. Passenger railways in the US are also “not what they were”, Mr Bayliss observes, yet Virgin sees a growth opportunity in a country where the car has long reigned over public transport.

In November it announced a strategic partnership with Brightline, the only private intercity passenger rail service in the US. Late month the renamed Virgin Trains USA announced plans for an initial public offering on Nasdaq which could value it at $3 billion, despite losses of $87 million on revenues of $5.2 million in the first nine months of last year.

The company only began running trains between Miami, Fort Lauderdale and West Palm Beach last year but plans to extend its service to Orlando and Tampa with an eye to hitting annual revenues of $810 million within five years. It is also looking at routes including Los Angeles to Las Vegas, Dallas to Houston and Boston to Washington.

The 278-metre long Scarlet Lady, destined to hold almost 2,800 passengers, floated out of Fincantieri’s Genoa shipyard last week, ready to be fitted with interiors designed to attract a crowd that defies cruise stereotypes.

The first of four ships Virgin and Bain Capital have ordered for their Virgin Voyages venture over the next four years, it will test how keen “urbane, young, experience-led” millennials are to spend their time off at sea. “It is classic Virgin territory. We definitely think we can shake things up,” Mr Bayliss says, adding that Virgin Atlantic is already Europe’s biggest reseller of cruise holidays.

Virgin Voyages is tapping a growing market: the Cruise Lines International Association projects 6 per cent growth for the industry in 2019, which would take it to 30 million travellers, up from 17.8 million a decade earlier. But Virgin is chasing a relatively new demographic. Under-18s will not be allowed, Mr Bayliss notes, and “there won’t be a buffet”.

The first Virgin Hotel opened in Chicago in 2016, with Branson-esque touches such as a louche “shag room”, but the Miami-based management team have been tinkering with the model before rolling it out further.

“It took a long time to get to the end of the beginning,” Josh Bayliss concedes, but the team has now settled on a concept, pitching the offering as “a home away from home” – particularly for women. Rooftop bars, performance spaces to attract local musicians and restaurants designed to attract locals as well as tourists are all part of the new formula.

The Chicago hotel is now “highly profitable”, Mr Bayliss says. Further openings are planned for San Francisco, Nashville and Dallas this year, followed by a branch in New York and a rebranding of the Hard Rock Hotel & Casino in Las Vegas. – Copyright The Financial Times Limited 2019