Retailer has objected to Dublin City Council about application to demolish 47, 48 and 49 Kildare Street and number 1 Nassau Street to make way for development 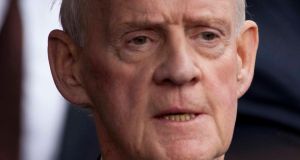 A property company backed by Larry Goodman is looking to develop an office block at Kildare Street and Nassau Street in Dublin. Photograph: Eamonn Farrell/Photocall Ireland

Kilkenny Group, the Nassau Street-based retailer, has claimed that plans to demolish a group of historic buildings in Dublin city centre to make way for a new office development “would further jeopardise the city’s retail environment”.

Architects for the scheme, Henry J Lyons, told Dublin City Council that the development seeks to sensitively introduce a contemporary commercial building into the historic streetscape of Kildare Street while protecting the fabric of the protected structure at number 2 Nassau Street.

The architects state that the design proposals lodged with the plan seek to make a positive contribution to the streetscapes by providing an elegantly-designed and carefully-proportioned building that respects the area.

However, the plan has provoked a lot of opposition with 36 objections now lodged with the city council.

Kilkenny group has already failed in the planning process to prevent Ternary securing permission for a €100 million large-scale office project on Nassau Street.

Consultants for Kilkenny Group argue that “simply granting the development in its current form would further jeopardise the city’s retail environment”.

Stephen Purcell of Future Analytics Ltd states that Kilkenny Group “are of the opinion that the concerns raised cannot be addressed by way of condition”.

Mr Purcell states that consequently a precautionary principle should be applied “and a decision to refuse planning permission be made” or, at a minimum, further information should be sought.