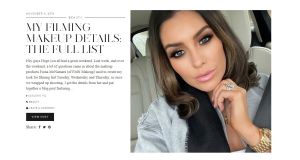 Profits last year soared by almost €550,000 at the social media company operated by owned by the businesswoman behind the fashion and lifestyle SoSueMe blog, Suzanne Jackson.

The businesswoman set up the SoSueMe blog in 2010 at age 25. She is also a co-director of SanFran Cosmetics Limited along with businessman Fran O’Gorman.

Separate accounts show that SanFran Cosmetics Ltd recorded a €902,760 profit in the 12 months to the end of December last

Ms Jackson and Mr O’Gorman each own a 50 per cent stake in the company which sells Ms Jackson’s branded palettes, lashes and other beauty products.