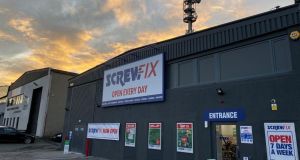 Hardware retailer Screwfix has opened three stores in the Republic as part of a plan that could see its estate expand to 40 stores in the “coming years”.

The company opened three stores this month alone as part of a plan that could create over 400 jobs.

Screwfix’s new stores are based in Sandyford and Swords in Dublin as well as Co Waterford. Another store will open in Ennis, Co Clare, early next year.

Screwfix chief executive John Mewett said the addition of bricks and mortar stores in the Republic was a “major milestone” for the group, resulting in increasing demand.

Each of the new stores will stock about 10,000 products including power tools, work wear and heating and electrical parts.

1 Opioid executive admits to ‘no morals’ ahead of prison term
2 Are there annual limits on inheritances or gifts to a child?
3 Fallon & Byrne founders McHugh and Byrne exit group
4 South Dublin Credit Union members urged to borrow more to ensure survival
5 American YouTubers embrace the crisp sandwich
6 From chips to €14bn in trade: Ireland and Italy’s enduring exchange
7 My father in a nursing home wants to gift me his house
8 NI businesses fear burden of post-Brexit red tape on goods transport
9 Farmer seeks to challenge €3.6bn Intel plan in High Court
10 Who are Ireland’s 17 billionaires?
Real news has value SUBSCRIBE