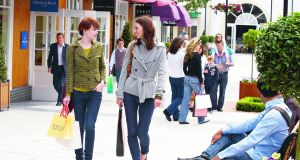 The phase three development at Kildare Village will bring the total number of outlets in the retail centre to about 120.

The owners of Kildare Village are to challenge a recent decision of Kildare County Council to refuse them planning permission for the development of a large new unit for an anchor tenant at the retail outlet centre.

Value Retail Dublin claims the ruling threatens the commercial viability and success of its planned €50 million phase three extension of the designer village.

It has lodged an appeal with An Bord Pleanála against the council’s decision to reject its application to revise plans for an extension approved by the board last year.

It had granted planning permission for 29 new shops, a two-storey car park and two restaurants but ruled that the site for the anchor tenant, known as unit 104, should be omitted.

The board had asked the centre to consider using the space to create a substantial pedestrian and cycling link to Kildare town.

However, Kildare Village claims it needs unit 104, which would add 638sq m to the permitted extension, to make the next phase of the centre’s development economically viable.

“The absence of unit 104 creates difficulties in relation to creating a legible mall and ensuring the development has a sense of completion for visitors,” it said.

The designer shopping outlet claims the omission of the unit will have an adverse effect on the phase three scheme.

It said unit 104 was a flagship “visual stop” placed at the end of a street that would act as a draw to shoppers.

“Without unit 104 acting as a visual stop at the urban square, visitors to Kildare Village will face an empty and unfinished space where the scheme will abruptly end,” it added.

Kildare Village also claimed the omission of the unit would adversely affect wind speed and climatic conditions experienced by visitors.

However, council planners said the proposed development would negatively impact on an appropriately designed pedestrian link to the town centre.

They also said its “unattractive utilitarian design” failed to comply with requirements of the Kildare county development plan for “high-quality linkages” between the designer village and Kildare town.

The council said the pedestrian link was critical to the future success of Kildare town as it hoped to attract a fraction of the estimated six million visitors to Kildare Village each year.

The phase-three development will bring the total number of outlets in the designer village to about 120 and will add 6,200sq m to the overall centre.

1 How do you know if you are wealthy? It’s not straightforward
2 Knock gets visit from world’s largest passenger plane
3 Fund entitled to injunction for possession of south Dublin property, High Court rules
4 High Court overturns permission for height increase in Johnny Ronan apartments
5 Galway development could transform skyline with 21-storey tower
6 Green Reit recruits Arthur Cox to help get planning for new cinema
7 Ardagh swings into profit amid $1.5bn gain on food cans spin-off
8 Planning permission refused for major new office block in Galway city centre
9 The gadgets that can make travelling a bit more enjoyable
10 How can I view my dead brother’s will if I’m not the executor?
Real news has value SUBSCRIBE