Cantillon: AS Watson, controlled by tycoon ‘Superman Li’, has proceedings filed against it 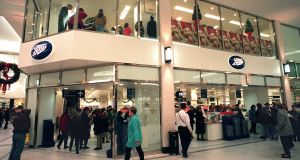 The Jervis Shopping Centre in Dublin has filed proceedings against yet another retailer in a debt row, the sixth rent dispute between the centre, owned by Paddy McKillen and Pádraig Drayne, and its tenants. Its opponent this time, however, is ultimately owned by a shareholder with the deepest of pockets and the rather ominous nickname, Superman.

JSC Properties has lodged High Court summary judgment proceedings against AS Watson (Health and Beauty Ireland), which operates here as the pharmacy chain Superdrug. The wider AS Watson group also owns the Perfume Shop chain that also has a kiosk in the Jervis centre. Jervis has previously instigated similar proceedings in pandemic-related rent rows with other tenants, including Schuh, Topshop, Field’s, Boots and New Look.

AS Watson is ultimately owned by the CK Hutchison group that is controlled by Hong Kong tycoon, Li Ka-Shing, whose other Irish interests include the mobile operator, Three.

“Superman Li”, as he is known in his homeland, is worth about $30 billion according to Forbes. He stepped down from the board two years ago at the age of 90 but is still closely associated with the group chaired by his son.

It isn’t the first rental dispute in which AS Watson has become embroiled since the pandemic started. In April, it was sued in the Netherlands by a Perfume Shop landlord in a rent dispute. AS Watson’s Irish accounts note that it has taken measures here to reduce its costs, and its directors say footfall at its outlets in shopping centres is down “significantly”.

The retailer has yet to file its defence to the claim and may dispute the sum allegedly owed.

In the meantime, another interesting aspect to the case is that it is ultimately a battle between offshore operations. JSC was re-registered by McKillen and Drayne in the Isle of Man after the last financial crisis, while AS Watson is ultimately a subsidiary of a company registered in the Cayman Islands.