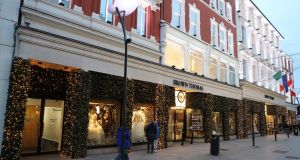 Brown Thomas has been deprived this year of the hordes of high-spending US tourists who typically roamed its aisles alongside the well-heeled locals. Photograph: Nick Bradshaw

The reopening of the non-essential retail sector today will be a boon for footfall-starved city centre outlets, particularly the large department stores Brown Thomas and Arnotts. This will be followed on December 7th, by another landmark day for the two Dublin institutions, when their owner, the Selfridges Group, joins them together into a single legal entity, Brown Thomas Arnotts (BTA).

The corporate nuptials will mark the culmination of five years of convergence that began after the Galen Weston-controlled Selfridges group bought the north city centre Arnotts operation in 2015, to go with its plush BT outlet on the other side of the river Liffey on Grafton Street.

Shortly after it bought Arnotts, Selfridges kicked off its “one business, two brands” strategy for the stores, which sought to eke out back-office efficiencies and streamline their respective operations while retaining their distinct personalities. Customers were recently told that there will be no change to their operations from the upcoming legal merger and their separate brands will be retained in coming years.

There is one potential ramification from the legal merger that may be relevant against the backdrop of the pandemic. Joining both stores into a single company, BTA, means that Arnotts and Brown Thomas will now be able to consolidate their financial reporting into a single set of accounts.

As well as making it more difficult for their retail rivals to accurately work out the individual performance of each store, it may also serve to obscure the full extent of the hit to the operations of BT, in particular, that was caused by the arrival of coronavirus.

The Grafton Street store has been deprived this year of the hordes of high-spending US tourists who typically roamed its aisles alongside the well-heeled locals. BT is also a popular haunt for the small but, until this year, growing cohort of brand-conscious Chinese visitors to Ireland. Their absence, which may be prolonged, will be a major financial loss to BT. But how much, we may never know.