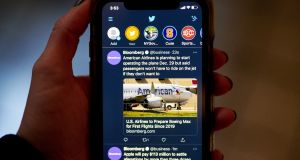 Twitter’s new fleets occupy a chunk of the app’s timeline screen whether you want them to or not. Photograph: Gabby Jones/Bloomberg

Twitter, as part of its ongoing commitment to wreck the heads of its users, has rolled out a new feature that will be familiar to users of other social platforms: “ephemeral” messages, usually image or video-based, that disappear after 24 hours. It has come up with a genius name for these fleeting tweets: fleets. But let us be clear, their name is the only good thing about them.

Objectors to fleets have a serious argument to make. On an app that has struggled to get to grips with harassment and disinformation, there is obvious potential for vanishing fleets to direct abuse and spread fake claims in a manner that creates even greater headaches for content moderators.

There is also a philosophical point about social app hopping: Twitter has copycatted the basic concept from Facebook-owned Instagram, which was in turn inspired by a feature on Snapchat. But if all social platforms become samey, even indistinct, the point of maintaining a presence on more than one of them wanes a little further.

Fleets are annoying for another simple reason: they have been allocated a substantial strip of screen real estate at the top of every user’s timeline, whether they themselves fleet or not. Like other Twitter innovations over the years – such as algorithm-powered feeds, quote-tweets, threading and the doubling of the original 140 character limit – their introduction privileges the most verbose and egotistical users, giving them bonus means to dominate the experience of the app for others.

Solutions are available. Do not click on those little circles invading the top of your screen – no good can come from it. Unfollow, mute or block those who insist on fleeting, ideally without announcing it in grandiose fashion. Hide the app, or delete it. Let Twitter know you reject their invitation to discover “a new way to join the conversation”. It needs to understand that change is bad before it steals any more ideas and then, with any luck, fleets may yet be a fleeting intrusion on our peace.