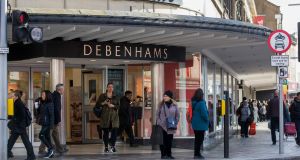 Debenhams is in talks with lenders to add about £150 million of financing as billionaire Mike Ashley tries to gain control over the troubled retailer. Photograph: Chris Ratcliffe/Bloomberg

British department store group Debenhams said on Thursday it would consider a £150 million loan offer from dissident shareholder Sports Direct, while indicating that Mike Ashley’s latest push for control of the struggling company is unlikely to fly.

Mr Ashley’s Sports Direct, Debenhams’ biggest shareholder with close to a 30 per cent stake, made its unsecured loan offer late on Wednesday with conditions that include the appointment of Mr Ashley as chief executive.

Debenhams, which has issued a string of profit warnings and lost 87 per cent of its market value over the past year, said the offer would require both the consent of existing lenders and bondholders as well as “material amendments” to existing facilities.

“Nevertheless, the board will give careful consideration to the proposal and will engage with Sports Direct and other stakeholders regarding its feasibility in the interests of all parties,” it said.

The loan would be interest-free if Debenhams agreed to give Sports Direct another 5 per cent of its equity without the normal obligation to make a full takeover bid. Without the equity, the loan would bear interest at 3 percent.

Debenhams rejected a £40 million loan offer from Ashley in December.

His latest offer came as Debenhams works on a major restructuring that analysts expect to include a share issue and acceleration of its store closure plans. On Monday it said it was in advanced talks with lenders for additional loans of £150 million.

Analysts played down the chances of Ashley’s latest manoeuvre being successful.

Independent retail analyst Nick Bubb said of Debenhams’ response: “Tactically, that might well be the right way to respond, but Debenhams would have to be desperate to take the plan seriously.”

Mr Ashley, one of Britain’s most famous and unorthodox businessmen and owner of the Newcastle United soccer club, last week launched a coup to take charge of Debenhams, seeking a shareholder meeting to remove most of its board and install himself in an executive role. He said he would step back from the top job at Sports Direct to do so. – Reuters