Italy's Gucci will stop using fur in its designs from next year, joining a growing number of fashion houses looking at alternatives after coming under pressure from animal rights activists and changing consumer tastes. Video: Reuters 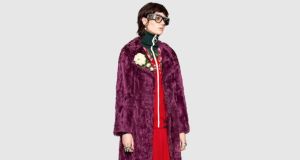 A Gucci model in a fur coat. Gucci will become part of the Fur Free Alliance, an international group of more than 40 organisations which campaigns on animal welfare and promotes alternatives to fur in the fashion industry.

Gucci will go fur-free next year and auction off all its remaining animal fur items, the Italian fashion house’s president and chief executive Marco Bizzarri has announced.

The changes will come into force with the brand’s spring-summer 2018 collection, Mr Bizzarri said during a talk at the London College of Fashion.

Gucci’s president said on Wednesday the move demonstrated “our absolute commitment to making sustainability an intrinsic part of our business”.

Mr Bizzarri said the new approach was made possible thanks to Gucci’s creative director, Alessandro Michele, who was appointed in 2015.

“In selecting a new creative director, I wanted to find someone who shared a belief in the importance of the same values,” Mr Bizzarri said. “I sensed that immediately on meeting Alessandro for the first time.”

As part of the change, a charity auction of the fashion house’s remaining animal fur items will be held, with the proceeds going to the animal rights organisations Humane Society International and LAV.

“Gucci going fur-free is a huge game-changer,” she said in a statement. “For this Italian powerhouse to end the use of fur because of the cruelty involved will have a huge ripple effect throughout the world of fashion.”

Gucci will become part of the Fur Free Alliance, an international group of more than 40 organisations which campaigns on animal welfare and promotes alternatives to fur in the fashion industry.

The fashion house is owned by luxury holding group Kering, which also has designer Stella McCartney as another fur-free brand under its umbrella.

The new decision by Gucci comes after fellow Italian brand Armani announced in 2016 that it would no longer feature fur in its collections.

1 Ireland faces 'deep downturn' this year and may not rebound until 2024 if there is a second wave
2 ‘The rental situation stops me moving back home’
3 Why are markets booming when a crash is on the way?
4 John FitzGerald: Civil Service expertise key to Government policy
5 Red tape logjam creates fear for Irish timber supply
6 How much do Irish people earn? And what will Covid-19 do to our wages?
7 Dublin consultancy Pathfinder set for expansion after buyout by Sia Partners
8 Ryanair pilots accept 20% pay cut, airline says
9 Citi Europe head sees Irish economy among fastest to bounce back
10 Preliminary deal to allow Irish goods travel through UK reached - reports
Real news has value SUBSCRIBE