Retailers call for return of ‘living over the shop’ scheme 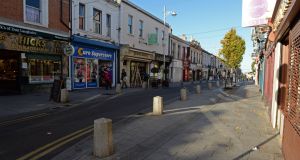 With a shortage of housing supply and a lengthy lead-in time before enough new homes are built, it makes sense to examine how the State might maximise the supply that already exists. Spurring the renovation of vacant units over retail outlets is an obvious, and perennial, consideration.

Nobody seems to know exactly how many flats over shops lie vacant. Dublin City Council planner John O’Hara has suggested it could be 4,000 or more, while others say it may be much higher – but there are enough to make a dent in the city’s accommodation shortage were they to become available for renting.

Anyone who has travelled through Dublin city centre on the upper deck of a bus has probably seen the scale of the apparent waste of space. From such a vantage point, it is easy to see the scores of seemingly empty residential units lying idle above bookmakers, newsagents and other retail outlets. Many others appear to be used as storage for the shops below, while a sizeable number are just left to fall into disrepair.

Minister for Housing Eoghan Murphy has previously signalled he is looking into how the owners of units above shops might be incentivised to bring them into the market.

Retail Excellence Ireland (REI), an industry lobby group, has also called for the reintroduction of the Living Over the Shop scheme, which was discontinued in 2006. The scheme gave tax incentives to shop owners to renovate disused spaces on upper floors as housing.

This week Lorraine Higgins, REI’s deputy chief executive, told a meeting of the Peter McVerry Trust, a homeless charity, that “at a time of an acute housing crisis it is a no-brainer to take this action. It will encourage people to improve their properties, thereby enhancing town centres, [and] make them a pretty place to live.”

REI said the flats could also be used by retailers to offer staff accommodation in areas where there is high demand, but little affordable supply.

It is worth remembering, however, why similar schemes have floundered in the past, including low take-up and difficulties over issues such as insurance, the provision of fire escapes and security issues.

We have been here before.