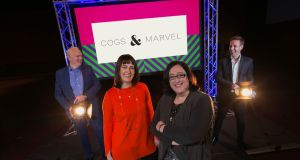 An Irish brand experience and creative event agency which has found success on the back of its work with multinational tech companies based in Ireland, is to open an office in Silicon Valley as its looks to double turnover in the coming years.

The business, formerly known as Green Light Events, has just undergone a major rebrand to become Cogs & Marvel. Founded by Róisín Callaghan and Jane Gallagher in 2006, the company, which organises and develops events ranging from major industry conferences to in-house company days, has grown rich working with the Dublin-based subsidiaries of Google, Facebook, LinkedIn, and Twitter.

Other clients of the fast-growing firm, which also operates an in-house travel company to manage travel and accommodation requirements for customers, include Dropbox, Mastercard, Fáilte Ireland, Slack and Uber.

It is also actively building further depth and expertise to its senior management team including the recruitment of creative directors, graphic designers and production/technical engineers.

The latest developments follow a strong period of sustained growth last year which saw Cogs & Marvel more than double its workforce to 40 people, as revenues climbed to almost €18 million from €10 million. Last year alone, the company were behind events held in 22 countries across four continents.

Cogs & Marvel, which recently won two prizes at the eighth annual Event Industry Awards, has a long line of high-profile events planned for this year, including Google Engage in Dublin and LinkedIn’s EMEA Sales Conference in Malaga.

The opening of a San Francisco office is in response to an ambitious growth plan to further internationalise the business and double its turnover to €36 million. Ms Callaghan is relocating to North America to run the office.

The move will enable the firm to support many of its existing clients, who are already based in Silicon Valley, while also allowing it to land new ones.

“To grow out, we want to expand our reach to clients in other industries and in other geographic markets. Establishing our first international office on the west coast is the most logical first move,” said Ms Callaghan.