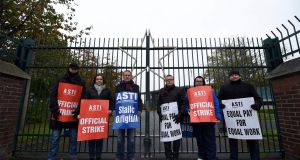 Association of Secondary Teachers of Ireland members take part in a strike over a pay dispute in Dublin, last November. Photograph: Clodagh Kilcoyne/Reuters

The spate of industrial action that hit the State in the second half of last year appears set to continue.

There will be further disruption in schools and on public transport after the Association of Secondary Teachers Ireland (ASTI) rejected proposals aimed at resolving a series of grievances, and Bus Éireann workers announced an indefinite strike from February 20th.

The teachers’ union is unhappy over pay for recent entrants and junior cycle reform, which led to strikes and school closures last November. Bus Éireann staff are involved a row with the company over plans by management to impose significant cuts in earnings to strengthen its precarious finances.

Against this backdrop, the Government will seek in the months ahead to negotiate a successor the Lansdowne Road public service pay accord. Its overall strategy has already had to be revised greatly after a €50 million pay deal for gardaí was agreed in the face of a strike threat.

The exact nature and scope of the action to be taken by the ASTI members remains unclear at present. Members will continue to boycott supervision and substitution duties but, in future, principals will be permitted to take moves to recruit alternative staff to carry out this work and avoid the school closures as was the case in November. It is, however, possible that some schools will be unable to secure sufficient cover and may have to send students home.

Given the approaching exams for tens of thousands of students, the ASTI does not appear intent on embarking on further strikes. However, one flashpoint will be over the threat of compulsory redundancy for any ASTI member in a school with surplus numbers of teachers.

In the transport dispute, Bus Éireann on Thursday offered to meet unions without pre-conditions to try and avoid the threatened strike. While the company seems prepared to put aside radical cost-saving proposals, including cuts to premium payments and overtime, it wants the unions to table their own proposals for generating up to €12 million in savings.

If the union position is that there can be no outcome which leaves members earning less – not just in core pay but also from various premium payments, overtime and allowances – any new talks may not last too long.

There is also a growing danger that if the Bus Éireann strike goes ahead, it may not be too long before school transport and Dublin Bus and Iarnród Éireann services get dragged in.