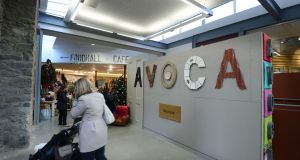 According to new accounts for integrated services group, Aramark Ireland Holdings Ltd, the group recorded the loss as revenue remained flat at €351 million in the 12 months to the end of September last.

The directors state that revenue has remained steady in the year, with increases in food service and retail offset by decreases in non-core facilities business.

The accounts don’t provide a breakdown of the Avoca performance but the chief executive of the Avoca business, Tara O’Neill, said: “I continue to be delighted with Avoca’s performance and direction.”

The directors for the Aramark group state that earnings before interest, tax, depreciation, amortisation and restructuring costs reduced from €21.4 million in 2017 to €4.9 million last year.

The directors state that “the decrease was largely driven by the non-core element of our facilities business outside Ireland which we have decided to exit and the strategic investment in new stores and footprint within the Avoca group”.

“We will continue to drive strong and profitable growth in our Irish food and facilities business.”

In 2015, the New York Stock Exchange-listed Aramark purchased the Avoca business for about €60 million from the Pratt family.

The group’s property-management income increased from €8.9 million to €9.3 million.

At the end of December last, the Aramark Group had €154 million in shareholder funds. The group’s cash almost doubled from €5.39 million to €10.4 million.