Supermarket chain points to impact of ‘mood of nation’ on spending 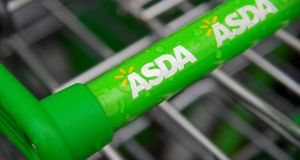 Asda has a network of some 17 stores in the North. Photograph: Reuters

Asda, the UK supermarket arm of US retail giant Walmart, said uncertainty surrounding Brexit was affecting its customers as it eked out a small rise in second-quarter sales, helped by a later Easter this year.

British prime minister Boris Johnson has promised to take the UK out of the European Union by October 31st with or without a deal, setting the scene for a showdown in parliament where lMPs are opposed to a divorce without a transition agreement.

“Our results for the quarter reflect the challenges faced by shoppers in this market as the uncertainty surrounding Brexit continues to loom,” Walmart chief executive Doug McMillon said on Thursday.

Asda, whose proposed takeover by rival Sainsbury’s for £7.3 billion (€7.9 billion) was blocked by Britain’s competition regulator in April, said its like-for-like sales rose 0.5 per cent in its fiscal second quarter to June 30th.

That compares with a decline of 1.1 per cent in the previous quarter, or a rise of 0.5 per cent adjusted for the later timing of Easter.

The group operates some 17 stores in the North.

“If ever a case study on the impact the mood of the nation has on UK spending habits were needed, this quarter has provided it,” said Asda chief executive Roger Burnley.

“Consumer confidence levels are at an almost six-year low – due in no small part to the ongoing uncertainty around Brexit and amplified by the impact of weather and tracking against national sporting events in the same period last year,” he said.

Mr Burnley said while Asda’s food business “performed well” and online growth outpaced the market during the period, its non-food business was “challenged”.