Former Steinhoff chief says retailer’s claim against him is 'embarrassing' 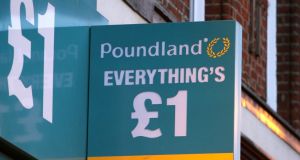 A Poundland store in London, which is owned by Steinhoff International. Photograph: Dominic Lipinski/PA Wire

The owner of Poundland in the UK and Dealz in Ireland said in June it will look to claw back base salaries, bonuses and other incentives paid to Mr Jooste since 2009 because of his role in the accounting crisis that triggered the retailer’s near-collapse.

Mr Jooste’s planned exception to Steinhoff’s claim includes the assertion that the company failed to provide enough detail of his employment contract in the lawsuit, including whether certain elements were made orally or in writing, according to legal papers filed to the High Court in Cape Town. The filing gives Steinhoff two weeks to “remove the identified causes of complaint”.

Steinhoff’s shares have collapsed by 97 per cent since the crisis erupted in late 2017 and the company is itself facing a string of lawsuits, which chief executive Louis du Preez on Tuesday said the company would prefer to settle as quickly as possible.

Steinhoff has claimed that payments to Mr Jooste were dependent on “the sound and successful financial performance” of the retailer and, had the company been aware of all the facts, the remuneration committee would not have recommended any payment.

Mr Jooste is arguing that these were not “express terms” of his employment contract. Moreover, he’s objected to Steinhoff not explaining how any fictitious deals or accounting irregularities resulted in a loss to the company, rather than its shareholders.

In at least one lawsuit against the company, where Steinhoff added Mr Jooste as a third party, the ex-CEO has argued that he needs access to a full forensic report compiled by PwC. Steinhoff, who commissioned the report, has refused, according to separate court papers. Mr Du Preez said Tuesday that the report needs to be kept confidential for Steinhoff’s own legal cases.

Late Tuesday, Steinhoff got some space to focus on the lawsuits as it reached an agreement with creditors where it doesn’t have to pay principal and interest on about €9 billion ($10 billion) of debt until December 2021.

Amazon fly dedicated aircraft into Belfast to fill online orders 07:41
Government measures will ‘significantly’ support incomes, ESRI says 07:32
Precipitous revenue slump, Deliveroo goes convenient; and data protection fears 06:38
Why we should be slow to use tracking apps in coronavirus response 06:00
Change of plan: How businesses are learning to reassess and reinvent 06:00

1 Lockdown exit: How can Irish economy reopen without big health risks?
2 Amazon fly dedicated aircraft into Belfast to fill online orders
3 Coronavirus: The online scams, apps and trends you need to know about during the pandemic
4 Precipitous revenue slump, Deliveroo goes convenient; and data protection fears
5 Property market has not felt full impact of Covid-19, warns Sherry FitzGerald
6 Why we should be slow to use tracking apps in coronavirus response
7 I want to change my will quickly in case I fall ill. Do I need a lawyer?
8 Government announces €1bn in supports for businesses
9 Deliveroo branches into grocery deliveries in Ireland
10 Finance ministers gather as fears grow for euro zone
Real news has value SUBSCRIBE