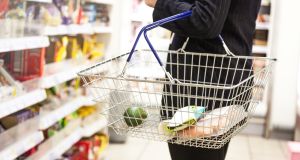 The consumer movement against single use plastic was reflected in a increased loose fruit sales, which grew 6.4 per cent in the past 12 weeks while prepacked items fell by 2.3 per cent.

Dunnes Stores remains the top grocery retailer in the Republic of Ireland, clinging on to its lead over Tesco and SuperValu.

But the Irish grocery market remains a closely fought battle, with less than half a percentage point separating Dunnes Stores on 21.6 per cent and third place SuperValu, on 21.3 per cent. Tesco came in second on 21.5 per cent.

The overall grocery market continued to grow, the figures showed, rising 2.7 per cent despite a tough year on year comparative period that included the heatwave of 2018 and major sporting events.

“While certain typical summer categories felt the impact of the mild weather this period, it wasn’t all bad news. Ice cream and sun care sales were down 17 per cent and 41.5 per cent respectively however wine, which is usually more popular in colder months, grew by 13.7 per cent,” said Charlotte James, consumer insight director at Kantar.

“All the major retailers took advantage of this, with Tesco particularly benefiting by ramping up promotions in the sector. The proportion of wine bought on deal at Tesco increased from 29.6 per cent to 43.8 per cent resulting in category growth of 14.9 per cent for the retailer.”

The average spend also increased as shoppers made larger but less frequent trips, spending an average of €23.29 per shop.

SuperValu showed a 10.3 per cent increase in the average spend per shop over the 12 weeks, and reduced its overall sales decline to 0.3 per cent.

Sales at Dunnes rose 6.4 per cent in value over the same period, while Aldi increased its sales value by 12.7 per cent, compared with Lidl’s more modest 4.3 per cent.

The consumer movement against single use plastic was reflected in a increased loose fruit sales, which grew 6.4 per cent in the past 12 weeks while prepacked items fell by 2.3 per cent.

“Aldi’s ban on black plastic trays for fruit and veg packaging and SuperValu’s move to 100 per cent compostable shopping bags are direct responses to a change in shopper habits,” said Ms James.

Average price growth of 1.1 per cent gave retailers a boost, with the strong euro contributing to an increase in cross-border shopping.

“Brexit uncertainties and sterling’s struggles saw cross-border spend increase by 14 per cent compared with this time last year, with much of that on fresh and chilled products,” said Ms James. “However, this still only makes up 0.6 per cent of all sales and remains a small part of the market.”