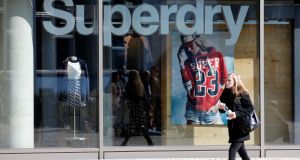 Left the house with the wrong coat again? Spare a thought for clothing retailers. It hasn’t been the right temperature for them all year.

Superdry is the latest, but probably won’t be the last, to suggest that the weather has dented sales and profits after wreaking havoc on normal patterns of wardrobe renewal.

In its case, an “extraordinary period of unseasonably hot weather” has shorn it of an estimated £10 million (€11.4 million) off its full-year profit because it hasn’t shifted its usual quantity of sweatshirts and outerwear either in Europe or the east coast of the US. Yes, it has been too dry for Superdry, and now the company is feeling the financial chill.

Combined with the admission that a currency-hedging problem will cost it another £8 million, the weather warning stripped the British retailer of some 21 per cent of its value on the London Stock Exchange on Monday.

Investors are no strangers to dips in revenues and profits being blamed on the wrong kind of weather. They know the weather typically serves to exacerbate deeper business problems, rather than being the material cause of them.

This year’s crop of warnings coincides with a retrenchment of several empires – from Marks & Spencer to Claire’s – that are the natural consequence of an overexpansion in bricks and mortar at a time when the market is shifting ever further to online shopping. The impact is being felt predominantly in the UK, where Brexit is the dark cloud hanging over consumer spending.

But, to be fair, what is going on with the weather? First, the Beast from the East forced shoppers off the streets, then it stayed consistently cold in April and May, skipping spring and prolonging the start of summer. When summer finally arrived, it refused to go away, making all those new-season knitwear displays look bizarre.

The only way the weather could be more unhelpful for fashion retailers now would be if it were to stay weirdly mild right up until January, when all the unsold autumn-winter stock would have to be shifted at a heavy discount no matter how cold it is.