Will Naughten’s broadband process end up in the courts? 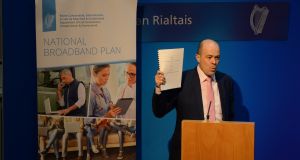 Two big questions hang over the Government’s broadband procurement process. Will the de facto winner, Granahan McCourt, the US venture capital group that leads the only consortium left in the bidding race, be able to undertake a project of this nature?

Undoubtedly the Government had expected to be signing contracts with an industry player, an Eir, a Siro, an SSE, entities that have built telecommunications networks, and not a financial firm, which is at one remove

The scheme will involve laying more than 110,000km of fibre-optic cable, in many cases across remote and difficult terrain, a logistical nightmare.

Secondly, if the contract is awarded to Granahan McCourt, and the Government is under intense pressure to do just that, will the process be open to a legal challenge?

The consortium has morphed so spectacularly since the early stages of the procurement process that almost none of the original partners – Enet, SSE, John Laing – are now part of the bid.

Might this give a disgruntled underbidder grounds for a challenge? This wouldn’t the first time a major telecoms sale here has ended up in the courts.

These questions might have come up at the dinner between Minister for Communications Denis Naughten and Granahan McCourt chairman and founder David McCourt in New York in July.

The Minister’s decision to meet with McCourt while his company was bidding for a major Government contract has exercised the Opposition but the real issue is the final bidder itself and how the Government can vouch for its shifting composition. Ditto for Granahan McCourt’s lawsuit with another company over the sale of its stake in Enet.

The main reason why Eir and Siro exited the race centred on the difficulty of predicting the planned network’s future operating cost, which is predicated on the uptake of broadband contracts.

If a low percentage of the 540,000 homes and premises don’t opt in, how will the operator make money and/or will it be compensated?

There is a big risk being undertaken here and it’s easier to imagine a venture capitalist walking away from the project than a big industry player with a brand and reputation to protect.