Halfords boosted by switch to cycling during pandemic 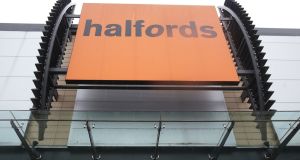 Halfords has turned out to be one of the corporate winners from the Covid-19 pandemic. Photograph: PA

First-half profit at Halfords doubled after a surge in bicycle purchases offset a softer market for motoring accessories, but the retailer opted not to declare a dividend for the period.

The group, whose shares were among the weakest performers among general retailers in 2019, has turned out to be one of the corporate winners from the Covid-19 pandemic.

Cycling-related sales at Halfords’ 440 stores were up 54 per cent in the period as, helped by a UK government incentive scheme, consumers there turned to bikes as a way of avoiding public transport during the pandemic.

The company said trading for the first five weeks of the second half continued to be “relatively strong” and it expected “good growth” in cycling sales.

Motoring has been more difficult. During the first British lockdown, car traffic fell to as low as a fifth of normal levels and the government there allowed a grace period on the roadworthiness test that UK vehicles older than three years must take each year.

As a result, retail motoring sales fell 23 per cent although revenue in the service-led Autocentre business grew 38 per cent.

Electric mobility was a big factor across both sectors, with sales of ebikes rising 184 per cent and the number of hybrid car services performed up 78 per cent.

The company did not make forecasts for the full year, saying it remained “cautious” about the impact of the current lockdown in England and the uncertainty over the UK’s Brexit transition period.

“Unlike the previous lockdown, we have been able to plan and mitigate against some of this risk early,” it said. – Copyright The Financial Times Limited 2020

4 Offers above €3.75m sought for prime residential opportunity in Killiney