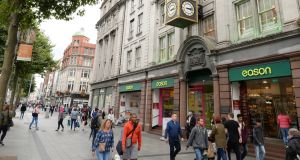 Earlier this week it emerged that Irish books retailer Eason is embroiled in a rental dispute with Pat Doherty’s Harcourt Developments in relation to its unit in Galway Shopping Centre.

In August, it was sued by a company controlled by French investors in relation to its tenancy of its Shop Street branch in the same city.

In May, Eason said it had written to all of its landlords seeking “substantial” rent reductions over the next 12 months to help it ride out the pandemic. This was to ensure the “survival” of the business.

Eason isn’t the only retailer here caught up in such disputes. A landlord company controlled by Davy stockbrokers recently took action against accessories retailer Claire’s.

There is one major difference, however, in the case of Eason. Many of the properties on which is seeking a break on its rent were sold to investors on sale and leaseback terms in the past couple of years. This included the Shop Street outlet, which fetched €7.5 million for Eason.

The 13 shops were no doubt marketed as being solid investments, with a blue-chip retail client, and strong trading numbers. The owners of the Shop Street property might well wonder why Eason can’t dip into the sale proceeds to help the store weather the storm.

But that money has already been accounted for. Last month some 230 shareholders in Eason approved a ¤20 million tax-efficient payout to themselves from the proceeds of the sale of those outlets. This followed a clever restructuring of the Eason group a couple of years back, separating the retail arm from the lucrative property assets.

Three more properties remain to be sold, including its flagship store on O’Connell Street in Dublin. They were valued at €40 million before the pandemic. That number looks a stretch now given the devastating impact of Covid on the retail sector, and Eason’s decision to seek rent reductions at the first sign of trouble.