Maxol boosts profits and shifts from fuel to food

More than 1,000 people employed indirectly across group, including at its 237 forecourts 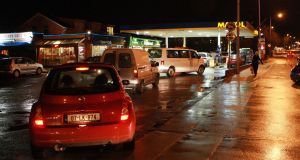 Queues at a Maxol station in Limerick. The company said it ‘had never seen anything like’ the coronavirus pandemic.

Forecourt retailer Maxol increased profits by 14 per cent last year and progressed its efforts to move its core offering from fuel to convenience food, its chief executive has said.

There are more than 1,000 people employed indirectly across the group including at its 237 forecourts. In terms of the Covid-19 pandemic, Mr Donaldson said the company had “had never seen anything like it”.

“Within two weeks, we had invested more than €50,000 across the business in health and safety measures,” he said. “Businesses had to take unprecedented measures in unprecedented times, and Maxol was no different.

“We reduced average serving times from three to two minutes in a massive effort to reduce time in-store, along with queuing time outdoors.

“Perspex screens, enhanced cleaning, staff training and a further investment in advertising to let people know that we remained open and committed to serving communities safely ran side by side with our daily operations.”

He added that the company’s deli offering, a key focus of the business in its expansion strategy, had to be adapted quickly; while fuel sales plummeted, and all eat-in dining options had to be suspended.

He also said the company has invested almost €20 million this year across 16 sites including Dolphins Barn, Ballinteer, Dooradoyle, Ardbrae and Newbridge.

Maxol’s first greenfield location since 2016 was opened at Rathnew in Wicklow following an investment of €3.75 million, creating 20 jobs. It opened in the early days of the pandemic in Ireland with immediate modifications being made.

A further €14 million investment is planned for 2021, which will see the conclusion of this phase of the company’s capital expenditure programme.

Maxol marked its move into the green energy sector in July with the launch of Bright, a 100 per cent green energy company founded in partnership with energy entrepreneurs Ciarán and Stephen Devine of Evermore Energy.

“Our focus on the food-to-go and eat-in markets along with top-up convenience goods certainly helped us steer the waters of the pandemic more robustly than some of our competitors,” he said. “Last year our ratio of fuel to food was at about 60:40 and this year that has shifted nearer to 50:50.”

10 If tourists are such pariahs should we not be testing them on arrival?