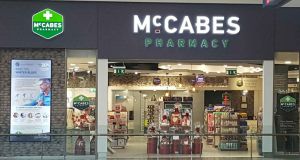 Employee numbers at the McCabes Pharmacy group have declined, with 364 people working for it last year versus 406 in 2018

The holding company that owns the McCabes Pharmacy group has forecast that revenues at stores it operates in shopping centres will be down by up to 75 per cent due to the Covid crisis.

Drummullan Unlimited, which operates 27 pharmacies nationwide, many of them in shopping centres, said directors of the group were taking measures to minimise the impact of the coronavirus pandemic on turnover by renegotiating lease terms with landlords, credit terms with banks and suppliers, and other cost-saving measures.

The group said as a result of the pandemic there has been a “very significant decline” in footfall to retail businesses that has particularly impacted shopping centres.

Drummullan has reported a 2 per cent rise in revenues to €52.2 million for 2019, although it noted that margin and gross profit both declined. This it said was due to continued reductions in drug pricing and HSE fee income, the ongoing impact of cuts applied to the pharmacy sector under financial emergency legislation dating from the 2008 crash and the rise of online sales.

McCabes had previously announced plans to add between 20 to 25 shops to the chain. However, its parent has warned in the newly-filed accounts that even outside of the pandemic the outlook for the pharmacy sector for 2020 and beyond is “challenging” due to a number of factors.

Other factors cited included a continuation of the implementation of generic reference pricing legislation and increased business costs.

Directors of the company have recommended “cost reductions, supply chain efficiencies and margin enhancements initiatives throughout the entirety of the business in an effort to mitigate the reduction in margins”.

Employee numbers at the group have declined, with 364 people working for it last year versus 406 in 2018.