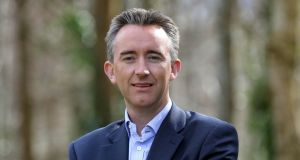 Mr Leamy will succeed Michael Maher in this role with Glen Dimplex. It is understood that Mr Maher, who joined Glen Dimplex in 2000, is moving to another position within the group.

In January, Coillte announced that Mr Leamy would leave the company in June to take a position in the private sector. However, it was not revealed what this new role would be.

It is understood that Mr Leamy was approached by Glen Dimplex about the role last year. He is expected to take a few weeks off on leaving Coillte before taking on his new role with Glen Dimplex, where he is expected to play a key role in the company’s ever-growing international operations.

It is currently led by chief executive Fergal Naughton, Martin Naughton’s son, and has its group headquarters in Dublin.

Mr Leamy was chief executive of the State forestry group for more than four years and is credited with having achieved a significant turnaround in the State agency’s business.

In January, Coillte chair Róisín Brennan said Mr Leamy had done an “outstanding job” by transforming it both operationally and financially. “The business is now generating significant and sustainable operating cash flows, is more customer-focused and is increasing its return to the State as shareholder,” she said.

At that time, Mr Leamy noted that Coillte had completed another successful year in 2018, which involved a “step change” in earnings from €85 million to €115 million.

He said this was the result of “intense organisational restructuring and investment”.

“We also achieved a successful sale of our wind assets for €136 million which represented a five-times return on our investment. Coillte has now achieved its strategic objective of achieving a 5 per cent cash yield on its €1.4 billion asset base.”

Mr Leamy won The Irish Times Business Person of the Month Award for September 2018, in association with KPMG, for its success in selling its wind assets to Greencoat Renewables.

1 Over 400 complaints from migrant workers at meat plants lodged with WRC
2 Avoca warns of redundancies due to coronavirus
3 The Irish Times Deal of the Year: The three finalists
4 The Irish Times Company of the Year: the three finalists
5 Companies without tax clearance shut out of Covid wage subsidy
6 McGann stepping down at troubled Aryzta
7 Coronavirus spreads to sandwich king
8 Grounded Aer Lingus pilots develop fix for turnaround glitches
9 Staff at Dublin and Cork airports to vote on work practice changes
10 Jervis shopping centre takes major tenants to court over rent disputes
Real news has value SUBSCRIBE