The Irish Times Business Person of the Month: David McRedmond 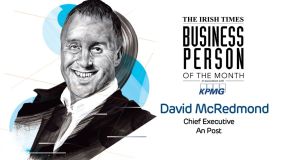 David McRedmond, chief executive of State-owned company An Post, has been chosen as The Irish Times Business Person of the Month for March, an award run in association with KPMG.

Since he joined the company in 2016, McRedmond has presided over a swift turnaround of An Post’s troubled position. Last month, the company said profit grew from €8.4 million in 2017 to €40 million in 2018. That came with turnover growth of 6.8 per cent to €897 million.

To put those numbers in context, in 2016, An Post’s pretax loss ballooned to €15.6 million while its pension deficit swelled by more than €100 million.

The turnaround overseen by McRedmond involved a step-change increase in stamp prices, a widening of the services the company offers, more flexibility in parcel deliveries and a consolidation of its network, the largest retail chain in the Republic.

McRedmond is also overseeing the company’s move into the mortgage market and it announced plans last month to offer loans of between €5,000 and €75,000 on terms ranging from one to seven years. An Post also recently launched a €5 million brand refresh to position it for its growth ambitions.