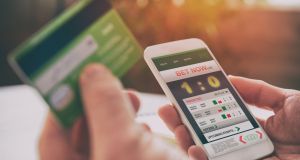 According to NHS figures, 430,000 people in the UK now have a serious betting problem. Photograph: iStock

Gambling giant Flutter Entertainment has come under fire in the UK alongside other bookmakers for practices the boss of the country’s mental health services described as “deeply disturbing”.

Claire Murdoch, mental health director of the NHS, wrote to the chief executives of five bookmakers including the Paddy Power owner, calling on them to stem the apparent tide of gambling addiction, describing some tactics used by these sporting companies as “shameful”.

In her letter, Ms Murdoch said: “In order to operate safely, the gambling industry has a responsibility to prevent the occasional flutter turning into a dangerous habit.

“Worryingly, some of the incentives apparently offered by individual firms to continue betting appear designed to undermine people’s ability to stay in control.”

Some of the tactics she mentioned include the offering of hospitality tickets, VIP treatment and free bets to people who regularly lose large amounts of money.

Her letter comes amid a torrent of criticism for bookmakers among British lawmakers. In response to the shift in public opinion, the UK’s Gambling Commission flagged that it would ban gambling on credit cards in April in an effort to curb problem gambling.

According to NHS figures, 430,000 people in the UK now have a serious betting problem and, in her letter, Ms Murdoch suggested bookmakers should “immediately ban credit card bets” from their websites. This, she said, would help ensure “people don’t spend money they don’t have and potentially rack up life-changing debt and anxiety that comes with it”.

Responding on behalf of the five bookmakers contacted by the NHS, the chairwoman of their lobby group, Brigid Simmonds, invited Ms Murdoch to meet them to discuss her concerns.

“We take our responsibility to our customers incredibly seriously and we are determined to raise standards and improve safer gambling. The points that you raise are important,” Ms Simmonds said.

Flutter declined to add further comments to those of Ms Simmonds.

Ms Murdoch also called for an end to the targeting of high-loss customers with so-called “VIP” treatment, which includes incentives such as free tickets and bets. Finally, she said the bookmakers should end the practice of “bet to view”, whereby consumers can stream a sports match online if they bet on it.

“As the head of England’s mental health services and a nurse of more than 30 years’ experience, I have seen first-hand the devastating impact on mental wellbeing of addiction and am concerned that the prevalence of gambling in our society is causing harm,” Ms Murdoch said in the letter, which was also sent to the chief executives of William Hill, BetFred, Bet365 and GVC.

1 Getting out from under ‘never-ending’ Celtic Tiger debt burden
2 Brittany Ferries ends Cork-Santander route
3 Pensions: Estonia plans to unleash a potential €4.85bn on economy
4 Explainer: what is the row about SF’s multinational tax plan?
5 Banks withdrawing from ATMs – another failure of regulation
6 Brittany Ferries announces new services to Spain and France from Rosslare
7 Fair Deal nursing homecare leaves little for bills and gifts
8 Coronavirus shuts down Starbucks, Toyota and BA
9 Britain after Brexit will not be alone, but it will be lonelier
10 More affordable iPhone 11 is unlikely star of Apple earnings
Real news has value SUBSCRIBE